The Committee on Design has reviewed a proposed plan for a residential tower at 301 S. Green. Planned by GSP Development and Golub & Company, the project site is located at the corner of W. Jackson Blvd and S. Green St. Currently the headquarters of Linn-Mathes Inc, a local general contractor, the site will be sold to the developers to be redeveloped. 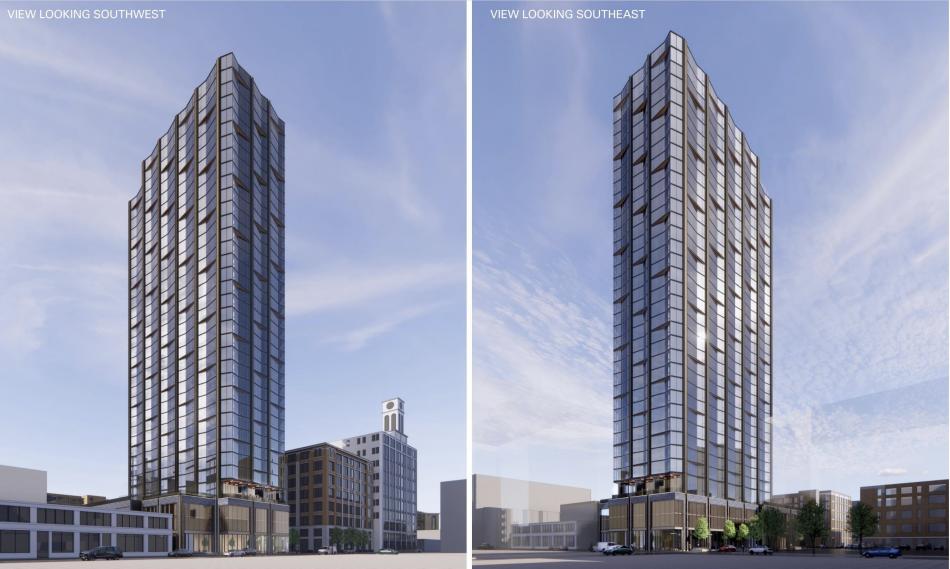 With Goettsch Partners in charge of design, the tower will rise 36 floors, holding 362 residential units. Poised as a residential development, the 404-foot tower will include no retail space on the ground floor and include 129 parking spaces. In its place, the ground floor street frontage will include a large lobby facing W. Jackson Blvd and will wrap the corner onto S. Green St. Leasing offices and coworking space will also be incorporated into the lobby area. A loading dock, utility rooms, and parking access will occupy the southern half of the S. Green St. frontage.

The design of the tower is expressed as a slender volume that is positioned at the northwest corner of the podium to maintain the street wall along the two street frontages. The facade is regulated by the expression of the structure vertically as the columns get pushed to the perimeter of the massing. The volume is faceted with a staggered pattern of folding planes that create a sawtooth profile that will reflect the sun at different angles throughout the day to enliven the facade. Horizontal breaks are added at a staggered rhythm of every four floors to modulate the scale of the facade and invoke solidity. 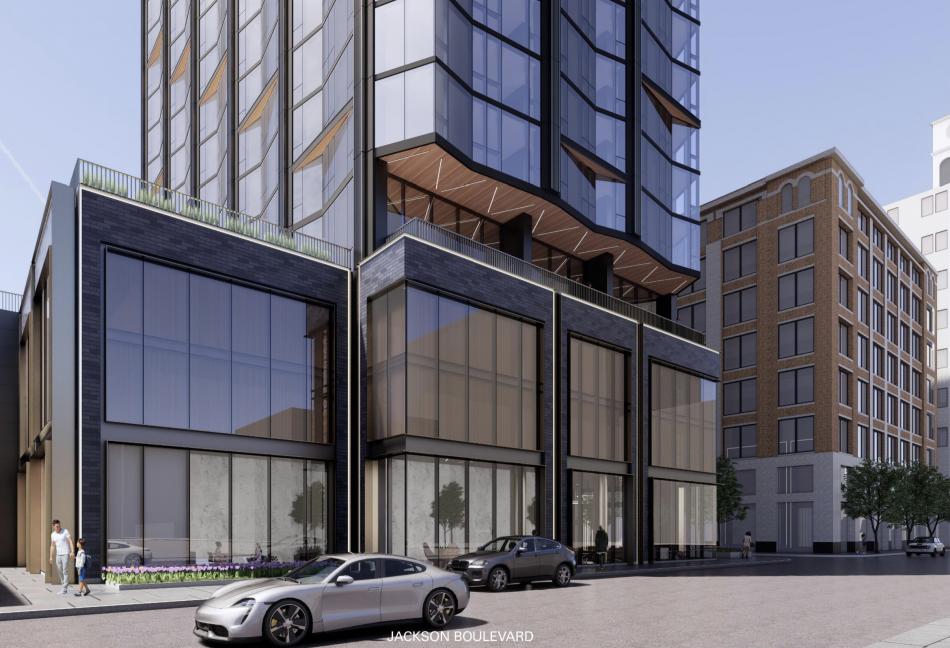 At the pedestrian level, the podium is designed to use a scale more appropriate for the pedestrian scale, wrapping the three-story volume in brick and metal detailing. The ground floor lobby is finished as a highly transparent space facing the street. The upper levels of the podium are clad in glass with a frit pattern and perforated metal screens where needed for ventilation.

The discussion portion of the presentation was opened up with comments from Philip Enquist. Enquist was quick to point out that this neighborhood is quickly becoming a high density urban residential zone and that the development team should consider looking at a more mixed-use program. Enquist challenged the notion that a residential lobby is an active use and that the design team should consider reducing the size of the lobby and introducing retail space. Enquist also pointed out that the loading, utility spaces, and parking access along S. Green St is not ideal and those frontages should also be considered for retail or mixed-use spaces. 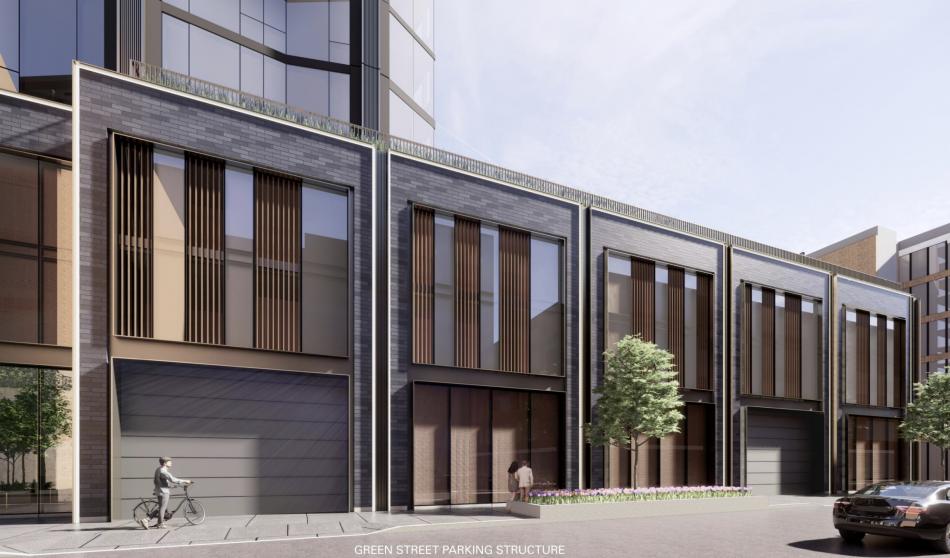 The development team responded that they agree, and their goal is to activate as much of it as possible. However, they said that with only two sides of access to the building and utilities needing access from the public way it has been difficult to achieve.

Maria Villalobos chimed in to agree with Philip Enquist about activating the ground floor with mixed-use spaces. Villalobos also went on to call attention to the sidewalk design especially along W. Jackson Blvd, pointing out that it would be nice to improve that sidewalk and potentially widen it to match the width of the sidewalk on S. Green St.

After discussing the lack of mixed uses, committee members turned to the design of the tower itself. Maria Villalobos asked if the heights of surrounding buildings could be used to influence the sculpting of the tower, not cutting the height but influencing its shape. Casey Jones commented that the contemporary vocabulary used on the facade lacks character and could use more focus from the design team. Philip Enquist chimed in to agree with Jones and said that if the vertical structure wasn't so dominating, then the wavy curtain wall could be more accentuated. Both Jones and Enquist agreed that the horizontals and verticals were in an unsuccessful tension. 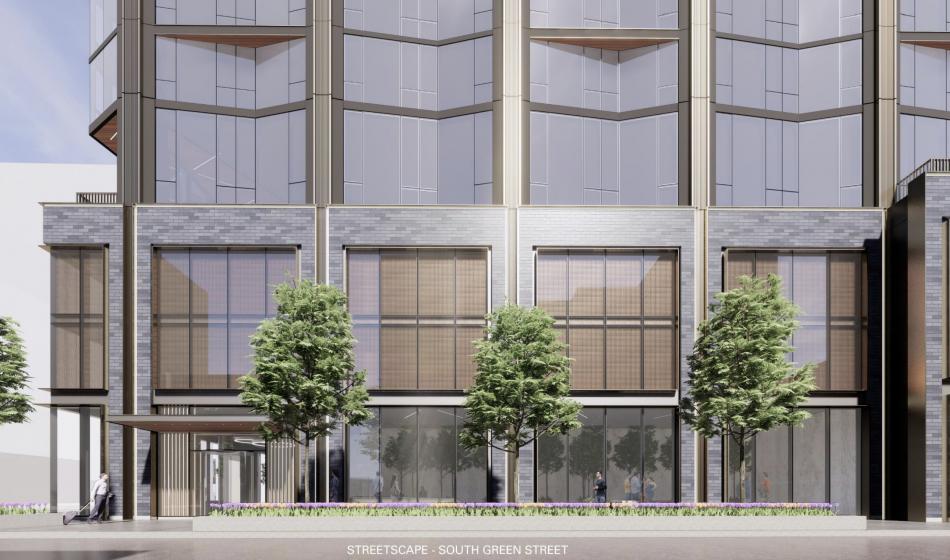 The design team responded that they wanted to avoid creating a building that had a gridded warehousy look like much of the new development currently happening. This design was their attempt to do something slightly different while remaining in complement to the history of the neighborhood.

After this meeting, the project will continue its journey through the approval process, with its next step being community meetings in the West Loop. The project is looking to rezone the site from DS-3 to DX-7 and use a Planned Development to gain a 4.5 FAR bonus to achieve a total 11.5 FAR. The plan will need approvals from the Chicago Plan Commission, Committee on Zoning, and full City Council.