Chicago Mayor Lori Lightfoot, along with Illinois Lt. Gov. Juliana Stratton, State Sen. Mattie Hunter and 3rd Ward Ald. Pat Dowell, joined developers The Habitat Company and P3 Markets to commemorate the topping-off of the Phase 1 residential building at 43 Green, the first equitable transit-oriented development (ETOD) on the city’s South Side. Centered around the CTA’s 43rd Street Green Line station in Bronzeville, the $100 million mixed-income, mixed-use project, which is being developed in three phases, will bring approximately 300 new apartments to the neighborhood upon completion. 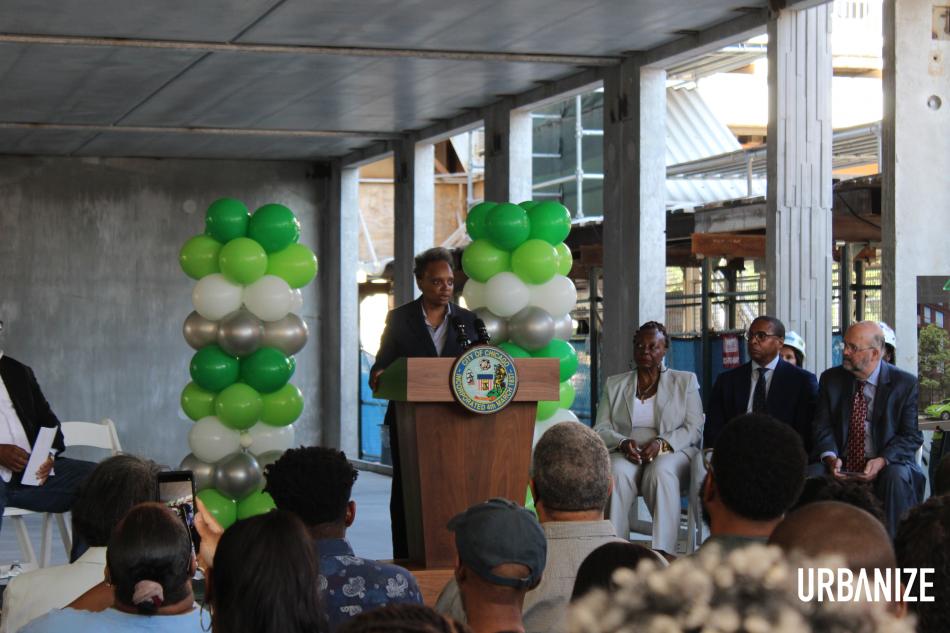 Located on a long-vacant, city-owned lot on the northeast corner of E. 43rd Street and S. Calumet Ave, just north of Hadiya Pendleton Park, the Phase 1 building is the largest of 43 Green’s three buildings. The 10-story development will house 99 residential units in a mix of studio, one- and two-bedroom floor plans, as well as 5,500 square feet of retail space and off-street parking. Half of the apartments will be reserved for households earning up to 60% of the Area Median Income (AMI), with the remainder leased at market rate.

"The City is focused on expanding equitable, transit-oriented development throughout our city to ensure affordable housing options and transportation access is available to our residents," said Mayor Lightfoot. "I'm thrilled to see 43 Green become our first ETOD development that will transform and uplift the surrounding community and the Bronzeville neighborhood. I'm grateful to the developers and our partners for both their advocacy of the Connected Communities Ordinance and for this investment in Bronzeville." 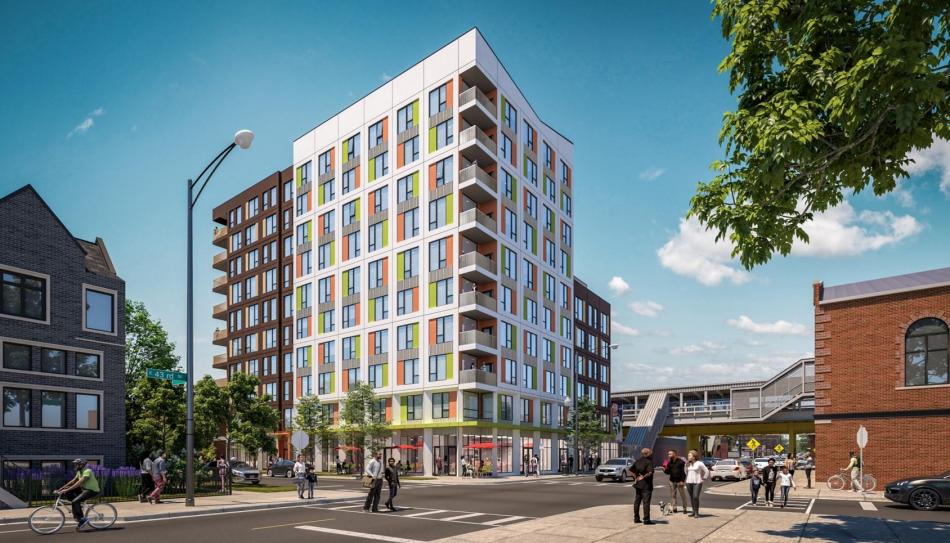 Chicago-based Habitat, a leading U.S. multifamily developer and property manager, is spearheading the project in partnership with P3 Markets, a real estate development firm based in Bronzeville that is dedicated to public-private partnerships.

Like many global cities, Chicago has a robust public transportation system, making it a leading market for pedestrian-oriented TODs that reduce reliance on vehicle ownership. Yet under earlier versions of the city’s policy, virtually no transit-adjacent development occurred on the South and West sides, with nearly 90% of projects that accessed TOD incentives between 2016 and 2019 constructed on the North Side, Northwest Side, in Downtown and around the West Loop. In addition to reinforcing existing racial inequities, these projects contributed to displacement as wealthier neighborhoods became even less affordable, according to the city’s ETOD Policy Plan. 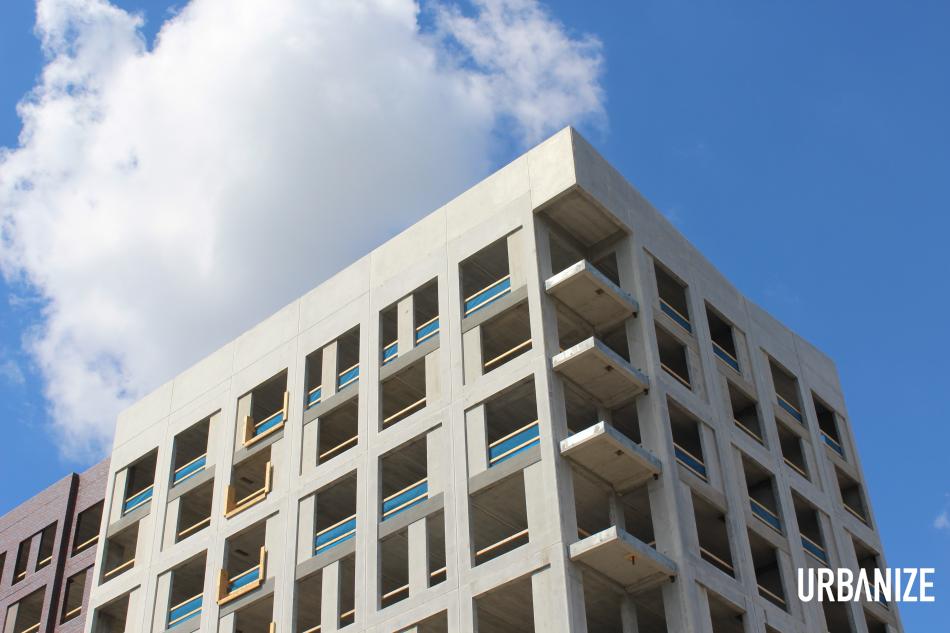 To bridge this gap, the Chicago City Council passed the Connected Communities Ordinance on July 20, 2022, to create more connected and thriving communities around Chicago’s vast public transit options. As part of the ordinance, TOD incentives were extended more broadly and equitably across the city, including to a standard four-block radius from rail stations and two blocks from additional high-frequency and strategic bus corridors.

Financing for 43 Green involved a multi-layered capital stack, including the use of the City of Chicago's Low Income Housing Tax Credits (LIHTC) allocation, tax credit investors Stratford Capital and debt provided by 5/3 Bank insured through the HUD 221(d)(4) program. 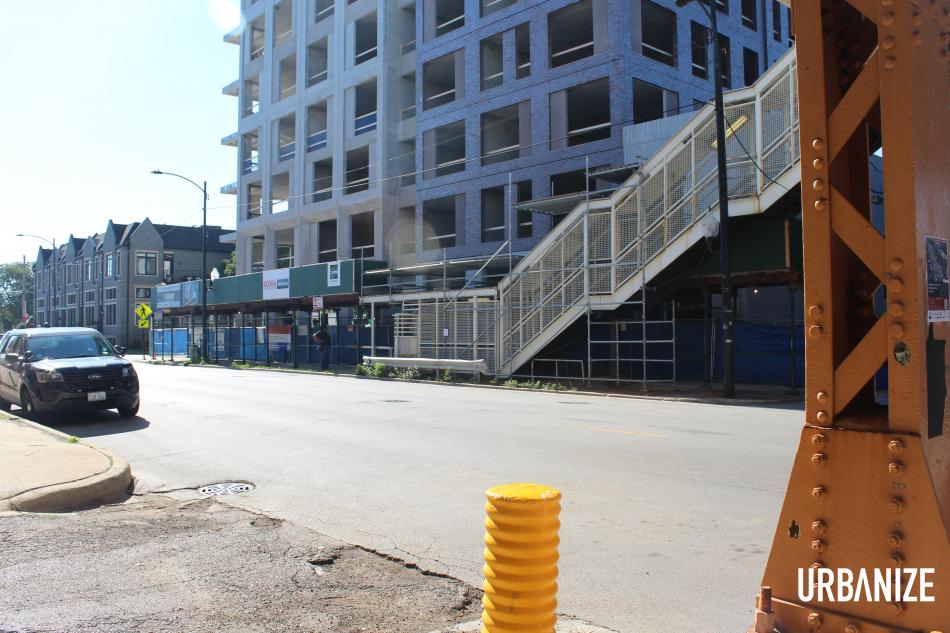 Construction of 43 Green is being led by a joint venture of Bowa Construction and McHugh Construction, with Landon Bone Baker as architect for the development. Two future retail tenants earmarked for 43 Green – Momentum Coffee and Super Cycle – are also minority-owned businesses.

Construction for the Phase 1 building is expected to be complete by February 2023, with first move-ins projected for later in the fall. The later phases of 43 Green call for two more mixed-income, mixed-use buildings, with the Phase 2 property anticipated to break ground later this year. Like the first phase, roughly half of the 78 units in Phase 2 will be designated as affordable.