LG Development scored permits to break ground on a nine-story, 134-unit rental project at the corner of Hudson and Chicago avenues. The L-shaped structure headed to 751 N. Hudson is the first of two buildings that will make up the HUGO development in River North.

It will be joined by a nine-story, 93-unit sibling at 411 W. Chicago Avenue, which is expected to receive its own construction permit soon. Both of the buildings will replace vacant lots. It's unclear what the HUGO name signifies, but BuildingUpChicago had a pretty good guess that it's an amalgamation of HUdson and ChicaGO.

The $32 million permit calls for ground-floor retail but does not specify the amount of on-site parking within 751 N. Hudson. However, a 2019 slideshow shared by the River North Residents Association puts the figure at 37 spaces. 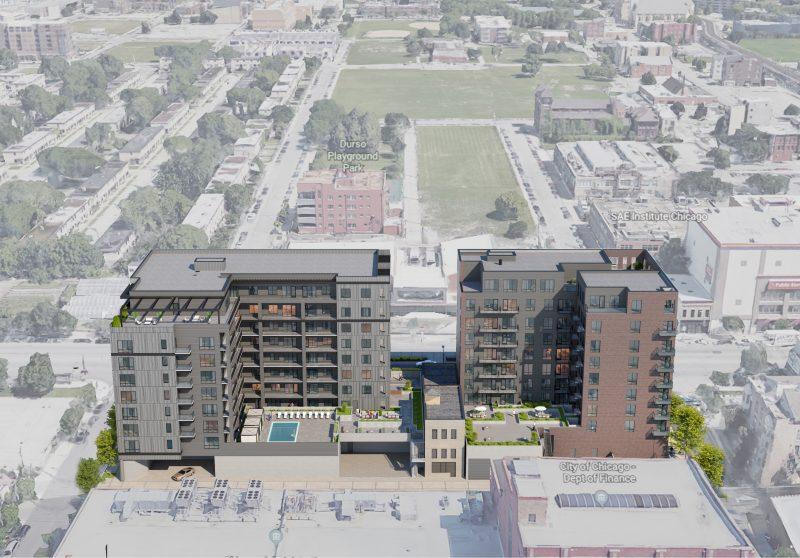 The newly permitted building at 751 N. Hudson is pictured on the left in this rendering.LG/NORR

Designed by NORR, the newly permitted building will feature a fitness center, a dog run, a bike room, and a conference room with "breakout work pods." The second-floor pool deck will have cabanas, fire pits, and an outdoor kitchen. A second rooftop deck will offer "unobstructed views of the Chicago skyline," according to LG's website.

Chicago Avenue has seen an impressive amount of development including projects such as the micro-apartments at 808 Wells and the 971-foot-tall One Chicago complex. The Hugo buildings will rise just east of a 25-story rental tower known as The Hudson, which opened in 2017. On the opposite side of Chicago Avenue, DAC Developments plans a 22-story building with 200 apartments at 808 N. Cleveland Avenue.