Members of the Chicago Plan Commission and Ald. Anthony Napolitano (41st Ward) faced off this week over a proposed 297-unit apartment project near O'Hare International Airport.

Disregarding "aldermanic prerogative," the longstanding and unofficial practice of giving city council members the final say on zoning matters within their respective wards, the commission approved the $91 million project against the wishes of Napolitano as well as fellow northwest side Ald. Nick Sposato (38th Ward).

Thursday's vote was the second time the Chicago Plan Commission granted developer GlenStar preliminary zoning approval for the project at 8535 W. Higgins Road, which has been under consideration since late 2016. The commissioners signed off on the project in 2017, but the city's Zoning Committee later shot down the proposal at the request of Ald. Napolitano. GlenStar filed—and eventually dropped—a lawsuit against the city.

Sposato and Napolitano argued that the project would bring too much density to the vacant site near the Marriott Chicago O’Hare, the Kennedy Expressway, and the CTA Cumberland Blue Line station. The aldermen also raised concerns about school overcrowding (though most of the proposed units will be offered as studios and one-bedrooms).

Napolitano even emailed local residents urging them to speak against the development at Thursday's meeting. However, zero members of the public signed up to voice opposition to Glenstar's plan.

Proponents of the project, including Chicago Planning Commissioner Maurice Cox and Housing Commissioner Marisa Novara, pushed back on criticisms and argued that building denser housing near transit is a citywide policy that should be applied independently of ward boundaries, especially in neighborhoods with a deficit of newer mixed-income multifamily housing.

"Wherever we see effective access to transit, we advocate for higher density housing," said Commissioner Cox. "This project does exactly that. It provides housing choice so that people who work at O'Hare have a shorter commute." 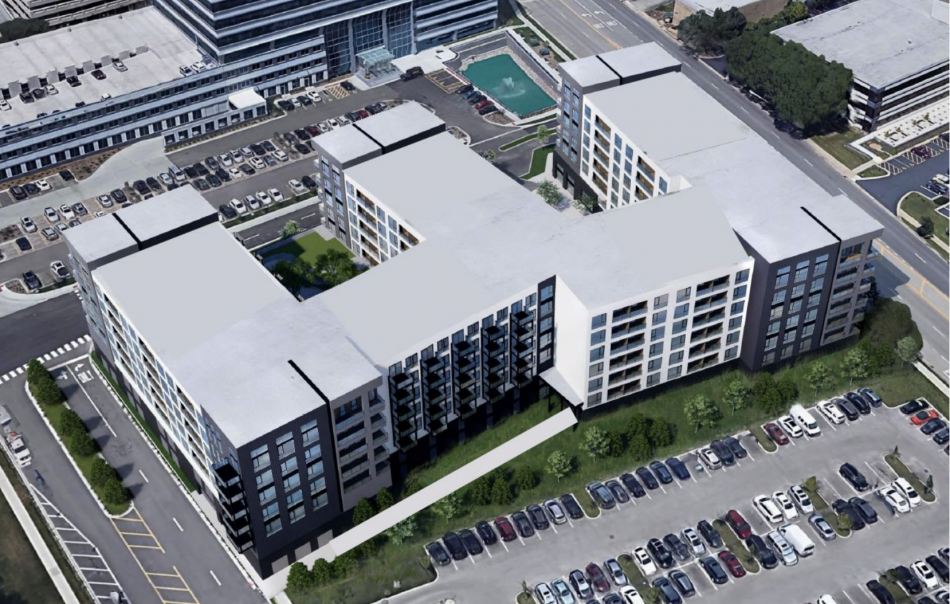 Designed by FitzGerald Associates Architects, the project at 8535 W. Higgins Road has changed little over the past four-plus years. The structure still features an E-shaped layout with two courtyards (though some exterior textured metal and fiber cement panels changed colors). The proposed building will include amenities such as a fitness center and dog run.

Although located next to transit, the project is not seeking a reduction in parking or a boost in density under the city's Transit-Oriented Development Ordinance. The development will provide 270 parking spaces as well as "enhanced pedestrian access" to the nearby Blue Line stop. The developers will also voluntarily exceed the city's current 10 percent affordable housing rules by providing 20 percent of the apartments (59 units) at below-market rates. The previous version included just seven affordable units.

Before work can begin on the apartment complex at 8535 W. Higgins Road, the project's Planned Development application will need to pass both the Committee on Zoning. Napolitano has already introduced a measure to delay the committee vote.  If the plan manages does manage to get a hearing, it is likely to reignite the debate over aldermanic prerogative versus citywide policy. Stay tuned.