After almost 500 votes from readers were tallied, Bronzeville Lakefront has been named the most anticipated megaproject set to break ground in 2022. After garnering a whopping 70% of the votes, the megaproject left the upcoming North Union and Halsted Pointe projects in the dust. Let’s take a closer look at our winner: 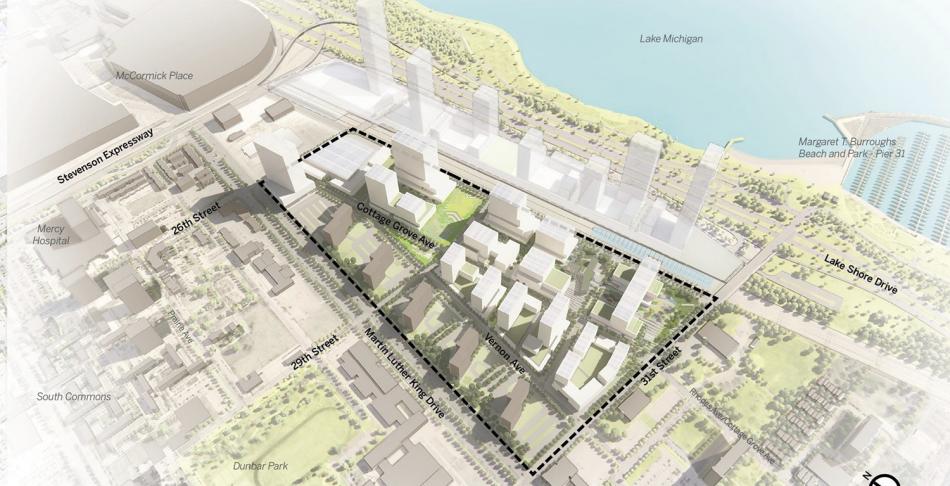 With a design led by Skidmore Owings & Merrill, the multiphase project will produce mixed-use development with new retail, commercial, cultural, and community, and residential uses with parks and open space included. The new construction can deliver up to 5,841 new residential units, with an overall allowable floor area of approximately 7 million square feet and 10 acres of open space.

A set of design guidelines, created in partnership with Alderman King and the Michael Reese Advisory Council, will govern the campus. A main point is to ensure the redevelopment engages and integrates the community. Buildings will consider access to light, air, and views while activating the streetscapes with active uses inside podia that are scaled to the surrounding neighborhood. Parking and service entries will be oriented away from main streets and screened from the public realm.

The project will see the realignment of the street network on the expansive property, reconnecting the parcel to the surrounding neighborhood. The reconnected grid will allow for connectivity and phasing, with a potential relocation of the existing Metra stop to E. 31st St. 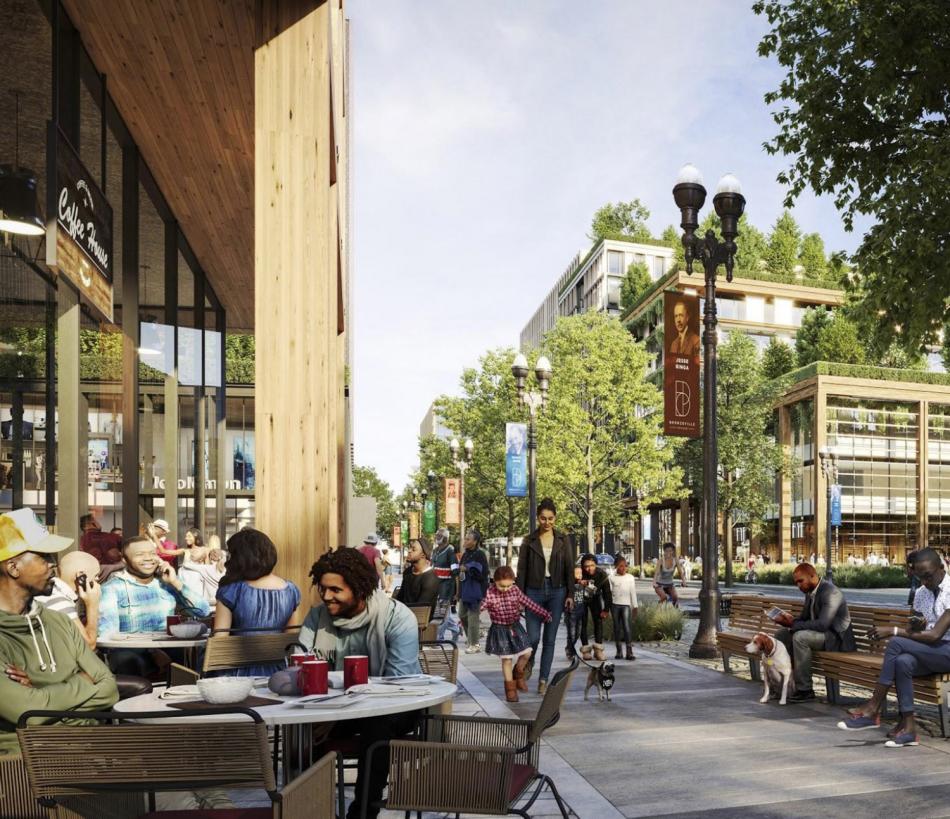 The site will be dotted with a series of open spaces woven together to foster connectivity and the integration back into the community and the city. Civic parks at E. 29th St and E. 31st St will be created with a cultural ribbon acting as a secondary spine through the complex. The 31st Street Park may include a seasonal plaza and pavilion, natural gardens, and will be the beginning of the cultural ribbon. Other potential outdoor spaces dotted between new buildings will include grill and picnic spaces, playgrounds, fitness spaces, garden seating, and a skateboarding strip.

Spanning from 2021 to 2026, Phase 1 of the project will produce 1.1 million square feet. The first building of the plan will be the Bronzeville Innovation Center. Rising 178 feet, the 500,000 square foot building will be anchored by the Chicago ARC, a life sciences and health innovation accelerator in partnership with Sheba Medical Center, and the Bronzeville Welcoming and Community Center. Retail space and the community center will face the park and ground floor plaza, while the upper portion of the structure will hold laboratories and office space for life sciences tenants. 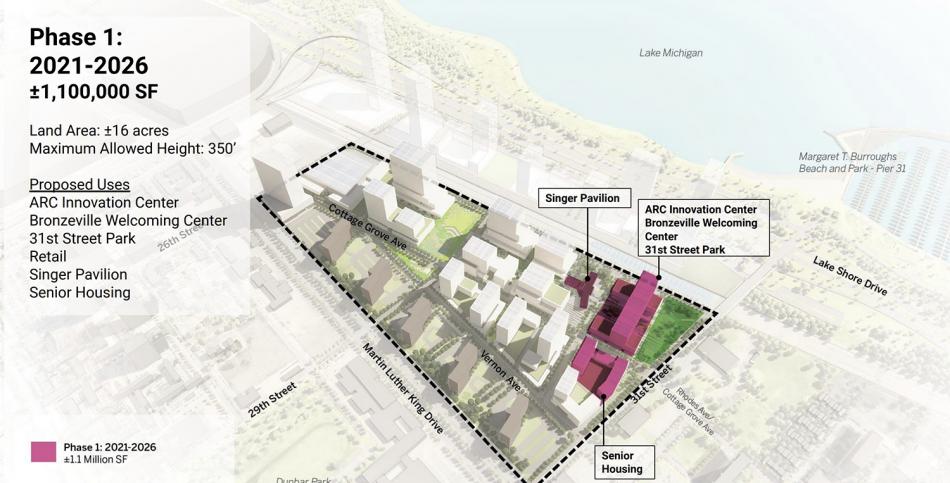 The building massing is composed of two podia topped by a bridge-like main volume. This structure creates a gateway to the Singer Pavilion and the larger site. The community center will face the 31st Street Park with a multistory space for signage and branding. The base will have a diverse collection of programs, lush plantings, and textured materials, broken up with brick and stone pavilions topped by outdoor terraces. Angled panels will make up the rest of the base façade for solar shading. Reflecting modernist heritage in the community, the upper volume will feature an expressed diagonal truss structure. Outdoor terraces will be placed at the ends of the volumes. 230 parking spaces will be located below grade.

Construction on the streets and utilities for Phase 1, the Bronzeville Innovation Center, and 31st Street Park are all slated for 2022.

Beyond that, Phase 2, planned to last from 2023 to 2041, will encompass 6.8 million square feet. While specific buildings have yet to be designed, allowed uses for the second phase include life science or healthcare, commercial, office, retail, residential, hospitality, mixed-use, and public open space. A data center is planned as a future possibility for the first building in the northern part of the site. 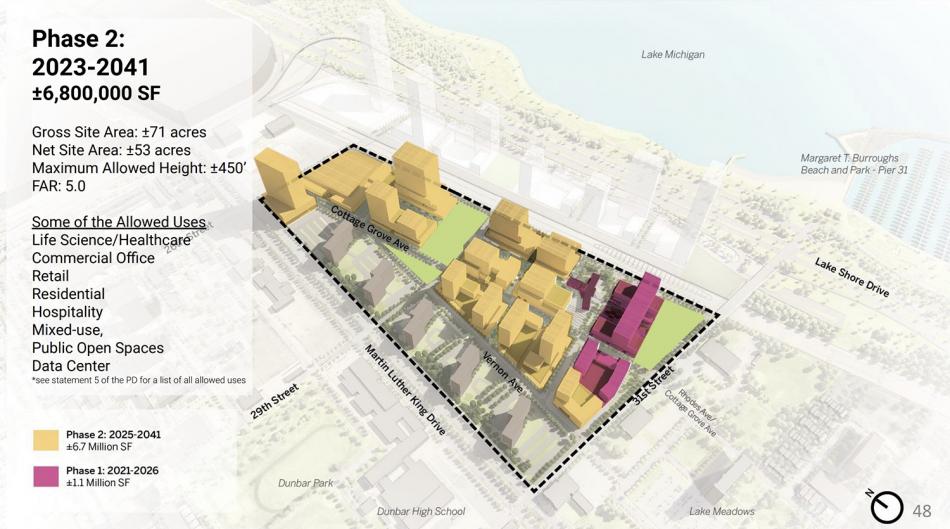 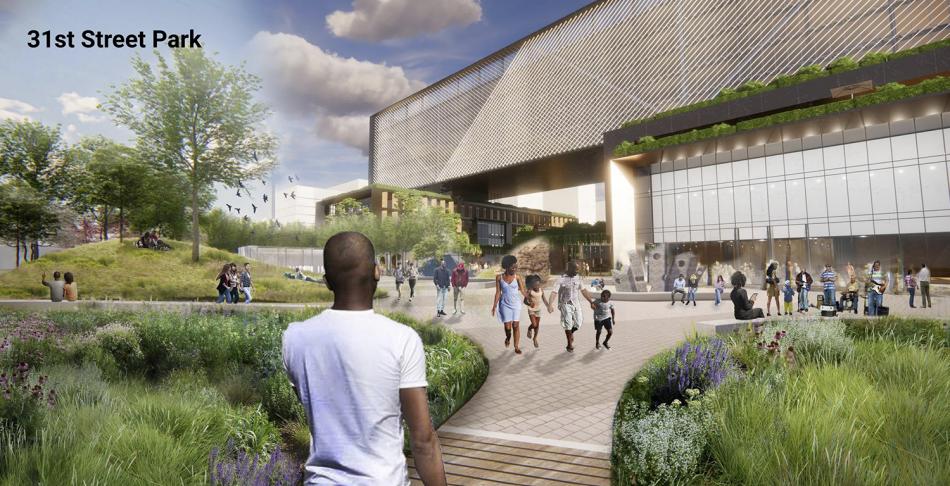 The full build-out of the site is expected to last until 2041, totaling a whopping 7.9 million square feet of space. The developers have negotiated multiple agreements with the city regarding the infrastructure and land sales, as well as the overall Planned Development. The site’s Planned Development was approved by the City Council in July 2021 with additional approvals of the $96.9 million land sale. Terms of the land sale allow the developers to buy the parcels over time with an initial $20 million down payment. The city has committed $60 million for the construction of the new street network for the property as well as $31 million to remediate contaminated soil at the northern end of the site.

Infrastructure work will be completed upfront over two to three years, beginning along E 31st Street and working north. The Bronzeville Innovation Center is expected to be delivered by mid-2024. The senior residential building and Singer Pavilion will be the next buildings to be completed, however a delivery date has yet to be determined. The developers plan to build out the rest of the development over time as the market demands.