The Community Development Commission has approved the sale of city-owned land for a mixed-use development at 9200 S. Burley. Planned by Interfaith Housing Development Corporation and Claretian Associates, the project site sits at the southwest corner of E. 92nd St and S. Burley Ave. The property is currently made up of a long-vacant parcel along S. Burley Ave and two heavily deteriorated buildings along E. 92nd St that will be demolished. The site is currently a mix of 7 parcels owned by the city and five owned by the Cook County Land Bank. 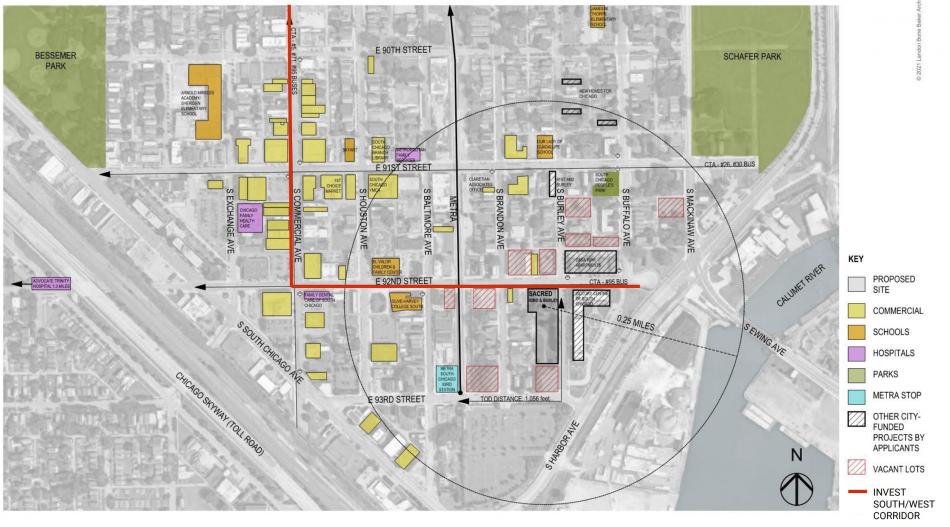 With Landon Bone Baker Architects tapped as the architect, the project is planned to produce a five-story mixed-use building. Expected to offer 81 affordable housing units, the building will be split up into15 studios, 11 one-beds, 21 two-beds, 25 three-beds, and 9 four-bedroom apartments. 17 of the units will be targeted at 30% AMI, 48 will be priced at 50% AMI, and the final 16 will be marketed at 60% AMI.

Rising 80 feet, the design of the building reflects the L-shaped site, implementing an L-shaped plan that holds the property line and has a subtle variation in setbacks. The facade will be clad primarily in brick with fiber cement panel accents. Textured brick accents will add depth and texture.

At the ground floor, a 6,500 square-foot commercial space will potentially hold a grocery store fronting E. 92nd St. Residential units will occupy the south wing of the ground floor, with the residential entry announced via a small canopy and large mural on the facade. A parking lot for 44 cars will occupy the southernmost end of the site, with an outdoor resident patio, playground, and multi-sport court located behind the building. 54 bike parking spaces will be placed in various locations around the site.

Totaling $40 million, the project will seek funding from multiple sources. From the city, the developers are seeking $5 million in TIF funding, $5 million in DOH soft funds, $1.9 million as 4% LIHTC, and a write down of land parcels to $1 per lot. The developers will fill the remaining gap with state funding, mortgage financing, and assorted grants.

The project has recently gone through a set of approvals including the Chicago Plan Commission, Committee on Zoning, and City Council. With approval from the Community Development Commission, the project’s financing will proceed to City Council to get a final vote of approval. A timeline for construction is currently unknown.