The Chicago Fire Football Club and Chicago Housing Authority have presented an initial plan for a proposed Chicago Fire Performance Center. Envisioned for a plot of land in the Near West Side, this proposal comes after initial plans for a complex in Belmont Cragin were canceled after resident pushback. 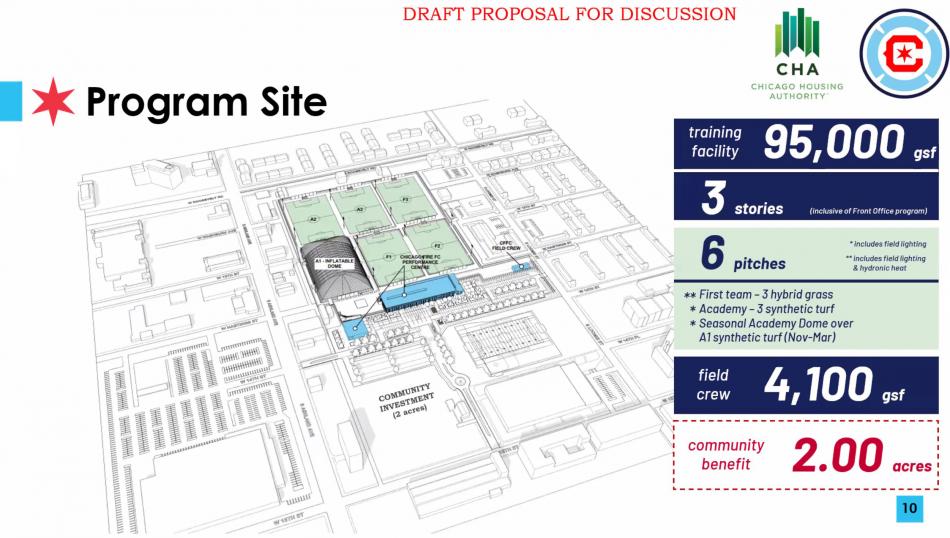 Located within the CHA’s Roosevelt Square masterplan, the proposal would span 25.5 acres roughly bound by W. Roosevelt Rd to the north, S. Loomis St to the east, W. 15th St to the south, and S. Ashland Ave to the west. Inset from all of those street frontages, the complex will be home to three hybrid grass fields for the team, three synthetic turf fields for the Chicago Fire Academy, a 95,000 square-foot, three-story training facility, and parking for the 200 employees.

Envisioned to fit into the surrounding context and add to the neighborhood, the new training facility will stand three stories clad in floor-to-ceiling glass. The building will hold administrative space, locker rooms, space for the Chicago Fire Academy, and more. The team is also planning to use a seasonal dome over one of the turf fields during the colder months. A pedestrian greenway connector for cyclists and pedestrians will traverse the campus from east to west, aligning with W. 14th St.

As part of the project, Chicago Fire is developing plans for space within and surrounding the complex for community space both indoor and outdoor. At the southwestern end of the site, two acres have been set aside for community investment. While that space hasn’t been programmed, an outdoor green space is likely for that area. Further improvements include more parking for the William Jones Senior Apartments and the renewal of the Jane Addams Family Resource Center.

CHA plans to retain ownership of the land and not sell it to the Chicago Fire. Instead, they will enter into a market-rate long-term lease, where the Chicago Fire will pay CHA for using the land. These lease payments will then be used to further support and expedite redevelopment and rehabilitation efforts of CHA housing. The project will need to comply with Section 3 policy requiring 25% of total labor hours to be completed by low-income workers. CHA residents will also be given priority for jobs and internships at the Chicago Fire facility. 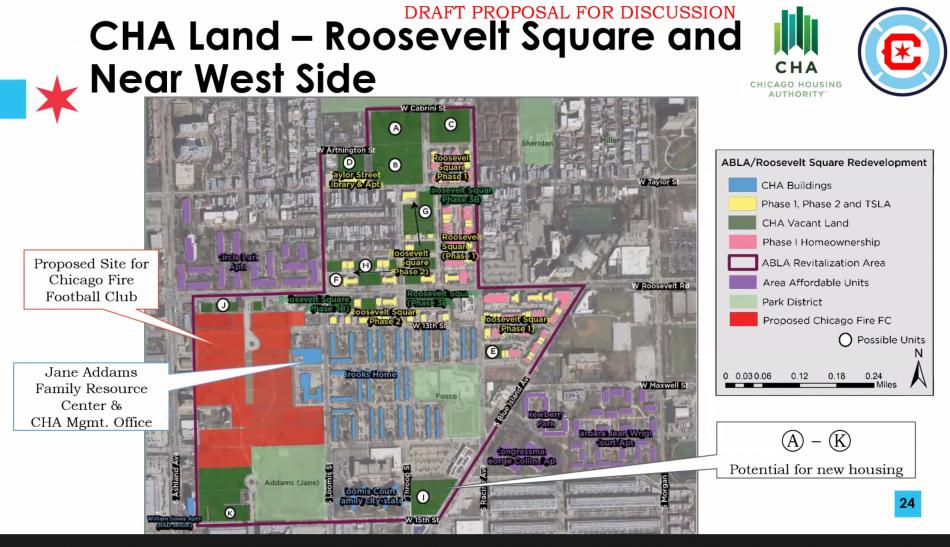 As this proposal moves forward, the CHA anticipated questions about what will happen with the development of affordable and mixed-income housing as this land is used for non-housing uses. CHA reported that 800 units have been delivered in Roosevelt Square as of now, with 280 of those designated as CHA units. Plans for 207 units in Roosevelt Square 3B will include 75 for CHA and are expected to break ground before the end of the year. Considering future opportunities, the CHA has identified 11 further sites within the Roosevelt Square boundary that have yet to be developed, allowing for them to continue developing more affordable and mixed-income housing.

The project will need local approval before moving forward and will need the greenlight from multiple city bodies including the Chicago Plan Commission. If the proposal moves forward, the Chicago Fire is projecting groundbreaking for Fall 2022.