This week, the Chicago Community Development Commission signed off on $3.5 million in Tax Increment Financing (TIF) to support the construction of a four-story affordable housing project in East Garfield Park. Dubbed the "Conservatory Apartments," the new building will replace a vacant lot at 414 N. Central Park Avenue, located just north of the Garfield Park Conservatory and Green Line station.

Developed by the Interfaith Housing Development Corporation of Chicago in partnership with nonprofit Deborah's Place, the West Side project is a contemporary take on a single-room occupancy (SRO) building and will feature 43 studio apartments to provide permanent supportive housing for individuals experiencing homelessness.

Twenty-two of the units will go to residents earning 30 percent of the Area Median Income (AMI), which works out to roughly $19,600. The remainder of apartments will target residents making up to 50 percent of the AMI or $32,650. HED Architects designed the building to meet Passive House requirements for sustainability, which will help lower operating costs as well as rents.

The Conservatory Apartments are expected to cost $12.1 million. In addition to the $3.5 million in requested TIF, the project also secured $6.9 million in funding from the Illinois Housing Development Authority (IHDA). The Chicago Department of Planning and Development signed off on the design and the developer is in the process of bidding the project out. Interfaith Housing Development Corporation has yet to select a general contractor but it is engaging several prospects including MBE and WBE firms, as required by the city.

The Community Development Commission voted 8 to 0 to grant the authority to the Department of Housing to negotiate a redevelopment agreement with the Conservatory Apartments team. The commissioners also recommended that the City Council approve the $3.5 million in TIF money for the project. The development will, however, need to close by this December or risk losing half of the $6.9 million in IDHA funding, according to Jim O'Connell from the city's Department of Housing. 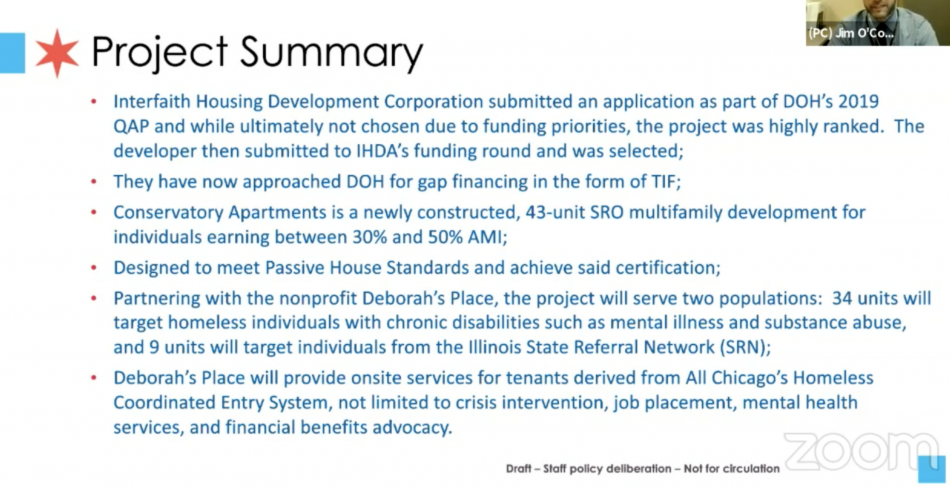