On Wednesday the Chicago City Council voted to up-zone the Loop's for-sale Thompson Center to DC-16 Downtown Core District—the city's tallest and most dense designation. While the move paves the way for developers to demolish the 1985 building for a massive skyscraper, the zoning change could also help entice the property's eventual buyers to preserve and reuse the controversial postmodern structure.

For years, the state has threatened to sell the Thompson Center, which is burdened by mounting deferred maintenance and skyrocketing repair bills. The state officially put the property up for sale earlier this month. Calls from preservationists to save the blue and salmon-colored building and its striking 17-story glass atrium were amplified in recent weeks following the shocking death of its famous architect Helmut Jahn.

Ald. Brendan Reilly (42nd) said he introduced the zoning change for the block-sized site at 100 W. Randolph Street at the request of Gov. Pritzker. The measure returns the property to its previous zoning designation, which was stripped away when former downtown Ald. Burt Natarus down-zoned the property in 1981 while the Thompson Center was still under construction.

Reilly told the Committee on Zoning, Landmarks & Building Standards on Tuesday that the zoning change was an "important first step" for the State of Illinois to market the property for sale to a private interest.

Boosting the site's zoning to allow a Sears Tower-sized skyscraper may seem like a clear indication that the Thompson Center is doomed, but up-zoning the property and increasing its floor-area ratio (FAR) will actually increase the chance of preservation, Reilly told the committee members.

"Adding FAR to this site by restoring it to the DC-16 designation is one of the only hopes preservationists would have to save the existing building, as adaptive reuse would require more density on the site for it to be economically viable," said the alderman. "If we don't restore the original zoning rights, demolition of the property is likely a foregone conclusion. This amendment provides potential buyers more options, including adaptive reuse."

Reilly said that he had spent time with Helmut Jahn discussing reuse solutions and he would "encourage developers to strongly consider" those options. "That said, the Thompson Center is currently costing Illinois taxpayers $17 million a year in maintenance and operating costs. Taxpayers can no longer afford this building," Reilly added. The alderman also noted that the state-owned property is tax-exempt and costing the City of Chicago $20 million in lost property taxes each year.

The zoning change for 100 W. Randolph doesn't mean a new project is approved for the site, and any large-scale proposal would trigger the city's Planned Development process and would require oversight and approval by the Plan Commission and City Council. 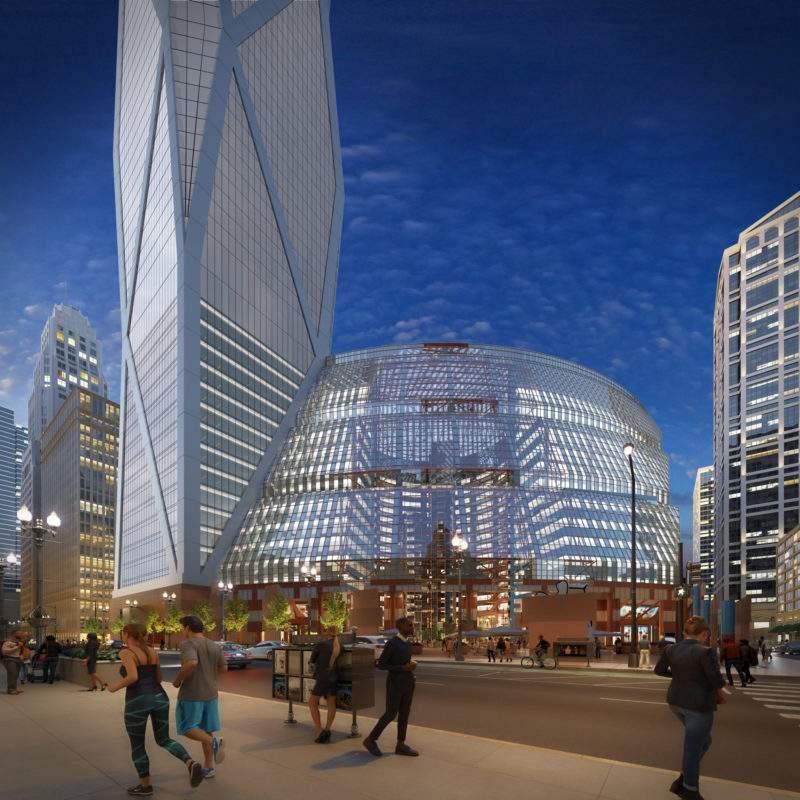 In 2018, Helmut Jahn worked with Landmarks Illinois to come up with a concept that preserves the Thompson Center's original atrium while constructing a new supertall skyscraper at its corner.Jahn/Landmarks Illinois

Meanwhile, preservation groups such as Landmarks Illinois and Preservation Chicago would like to see the Thompson Center added to the National Register of Historic Places, which would provide tax incentives for buyers opting to reuse the Jahn-designed structure. The only guarantee against demolition, however, would occur if the city designated the Thompson Center as an official Chicago landmark.

Such a designation doesn't necessarily mean the building will be frozen in time in its current neglected condition. The protection could extend only to the architecturally significant portions of the building which would allow a developer to re-vision the rest of the structure, similar to the recent redevelopment of Chicago's Tribune Tower into luxury condos.

"We challenge the City of Chicago and the State of Illinois to come together to protect—through landmark designation—the important features of the Thompson Center including the front elevation, the plaza, and the 17-story atrium," Ward Miller of Preservation Chicago told Urbanize.

"If we're really a forward-thinking city and state that recognizes the value of our historic built environment, we would figure a way to protect this building while still encouraging its reuse and redevelopment," said Miller. "There are a lot of possibilities here."