The Committee on Design has reviewed the two-tower office plan for 655 W. Madison. Located along the Kennedy Expressway, the project site is a full-block lot bound by W. Madison St, N. Desplaines St, W. Monroe St, and the highway. Conceived by The John Buck Company, the project is targeted at office tenants flocking to high quality Class-A office space within the city.

Designed as a collaboration between JGMA and HOK, the development consists of 1.5 million square feet of office space situated within two towers rising 39 and 29 stories. Retail and restaurant space will activate the ground floor, while parking will occupy three floors of the podium. Atop the podium, a one-acre rooftop park has been designed by Site Design Group, with multiple amenity offerings connected to the park on that floor. 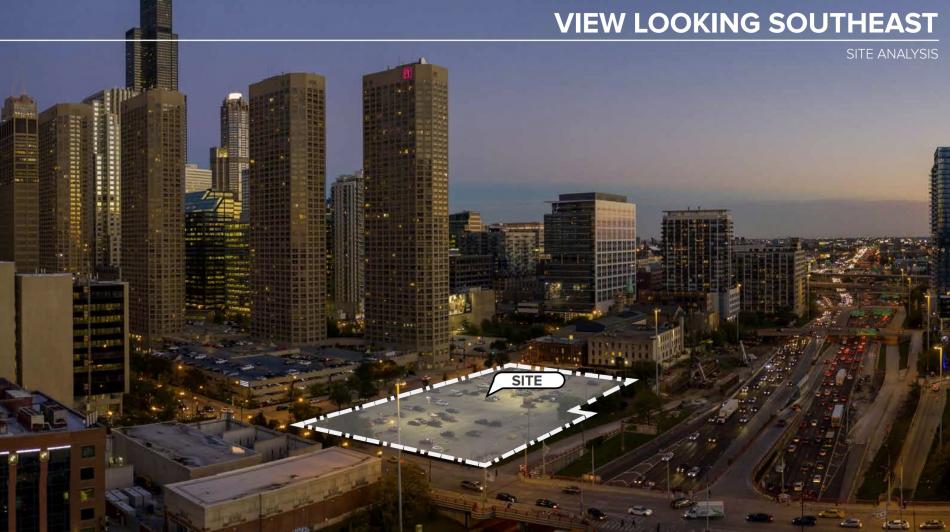 The project’s massing began as an extrusion of the site that was carved out to create a void between the two towers whose heights have been staggered. At the base, a sense of human scale has been added, with the towers having been separated visually from the podium. The tower masses have been carved to angle away from each other with the horizontal orientation of the floor plates accentuated with enlarged spandrels.

Driven by the expectations of Class-A commercial high-rise development, the towers have been developed with distinctive floor plates that measure 30,000 square feet on the low-rise portions and 27,000 square feet on the high-rise levels. Balconies will be included on the west elevation on every third floor. Each office floor will have its own isolated exhaust and intake air for the HVAC system, never mixing air between floors inside the building. The articulated spandrels on the tower act as functional gills to provide the fresh air for each floor. 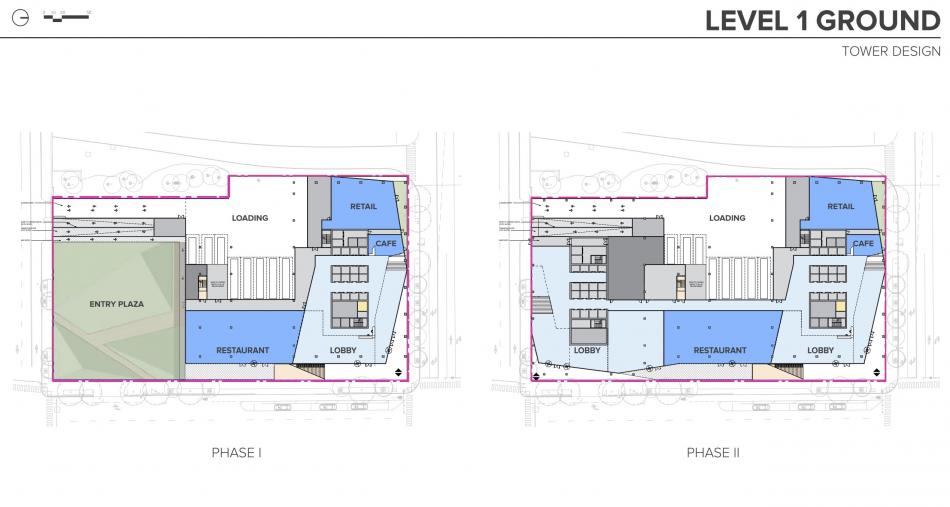 At the ground floor, the site design will shift as Phase 1 and Phase 2 are built over time. The lobby for the northern tower will face the intersection of W. Madison St and N. Desplaines St, pulled back from the property line to increase sidewalk space. A retail space will occupy the northwest corner of the floor plate and a large restaurant space will face onto N. Desplaines St with a wide sidewalk space for outdoor dining.

After Phase 1 is complete, an entry plaza will occupy the footprint of Phase 2 while it is awaiting construction. Once construction on Phase 2 is complete, the southern tower’s lobby will occupy its respective corner, continuing the building setback to create a generous outdoor space. Parking and loading access will be off the western end of W. Monroe St. 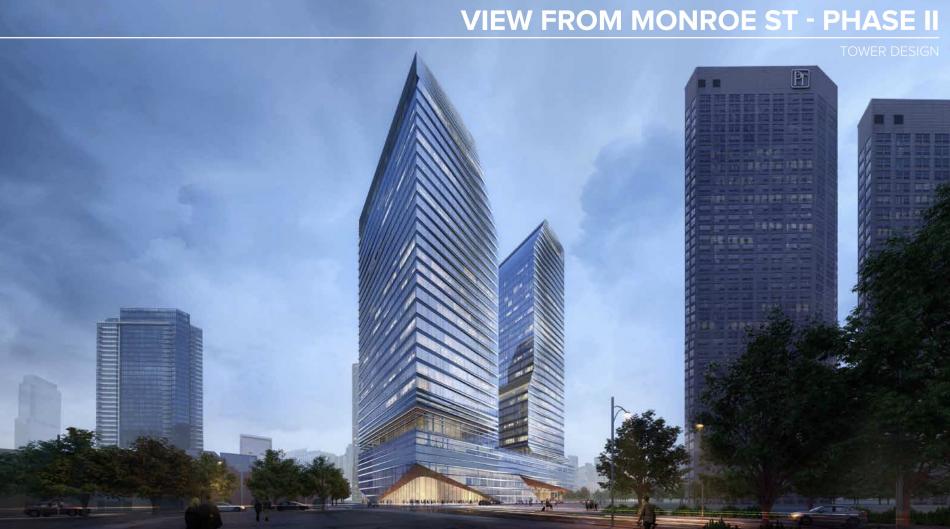 The discussion began with Lesley Roth asking about the treatment of the exposed walls that will face the open footprint of Phase 2 before it is constructed. The development team commented that they are looking at the need to enclose the podium on the southern side and have yet to determine what it would be. While they think preleasing efforts may mean they could start construction of Phase 2 directly after completing Phase 1, plans for covering that south facade could include a conventional wall or public art.

Sara Beardsley asked if the park on top of the podium will be accessible to the public. The development team responded yes, and the design team tried to show the circulation via one of the elevators in Phase 1. John Ronan chimed in to question how anyone from the public unaffiliated with the building would know how to get up to the park. Ronan felt that it is not a truly public space and should just be restricted to the office tenants. 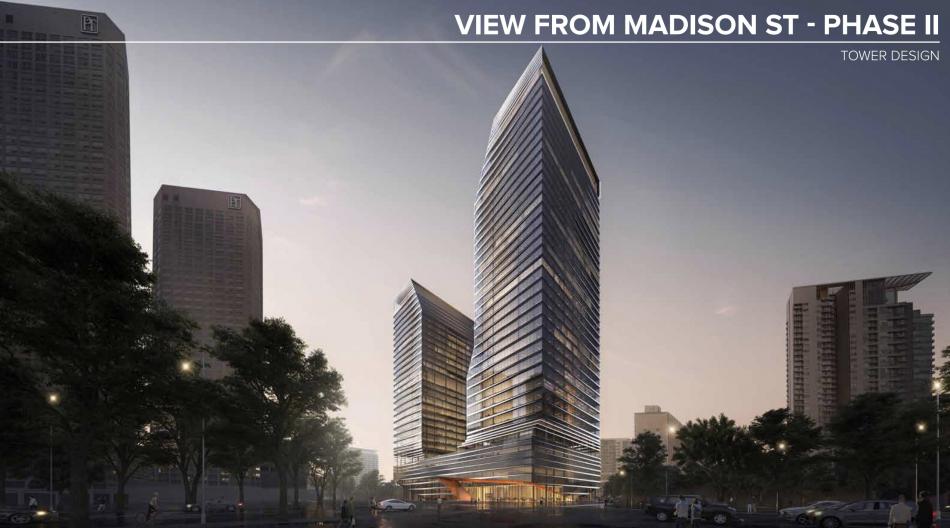 Sara Beardsley also questioned how it would feel to be next to this large, six-story podium and how the architecture could be used to alleviate the mass. The development team spoke about how the carve outs in the base of the building work towards a human scale and the number of setback entries create some shelter as you walk around the building.

Brian Lee discussed the importance of the project as a contribution to the city and that he sees it as an island that is not related to its surroundings. Lee questioned whether the amount of parking could be reduced to bring the green space closer to the public realm. Ultimately, considering a set of issues with the proposal, Lee wondered whether such a strong developer and design team could do more to elevate the level of commercial architecture in Chicago. 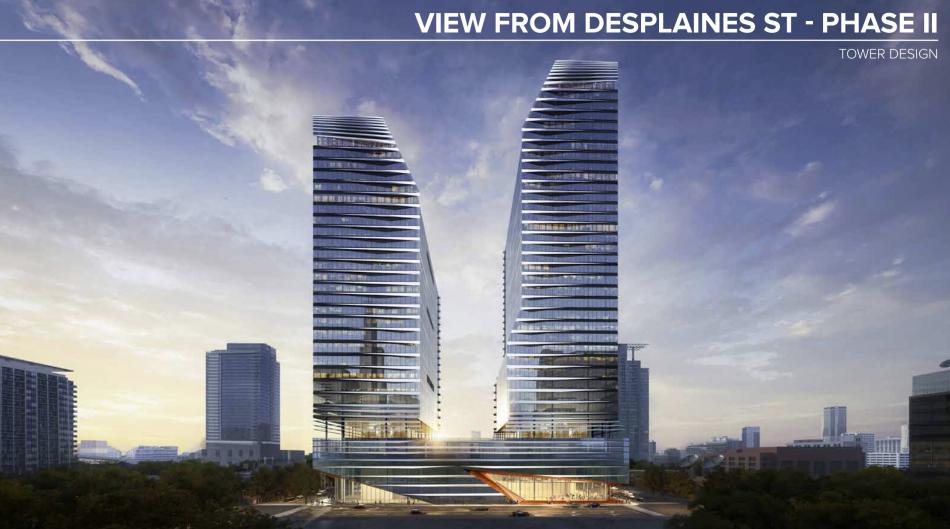 Replying specifically to the discussion of parking, the development team said that parking is always a tradeoff where they would like people to take public transportation, bike, or walk to work. However, in a post-COVID world, the ability to drive and park at work rather than taking the train can be a significant decision for office tenants and with the direct adjacency of the Kennedy Expressway this can be a strong advantage for leasing the building. As a concession, the design team noted that the parking floors are isolated from the ramps and the floor-to-floor height is taller than usual so it would be possible to convert it to other uses in the future.

With the Committee on Design review complete, the development team and DPD will review and take the comments into consideration as the project moves forward. Due to an already approved Planned Development active on the site, it is currently unclear what slate of approvals the plan will be required for the project. 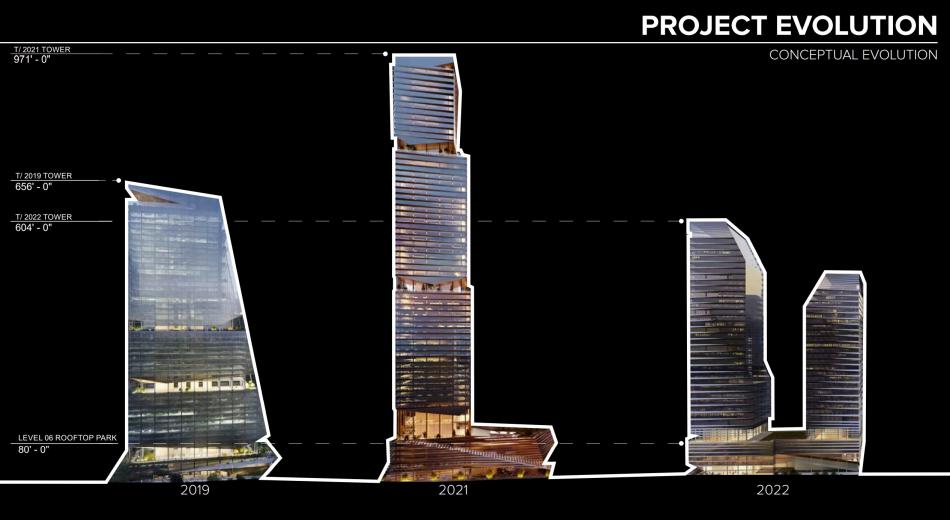