The Committee on Design has reviewed the proposal for Galleria 89, a mixed-use plan for a site at 8854 S. Commercial Ave. Located at the corner of E. 89th St and S. Commercial Ave, the project was the chosen winner of the South Chicago Invest South/West RFP. The winning proposal is being developed by 548 Development.

With a design coming from Rivetna Architects and Farr Associates, the mixed-use project will see the rehab of an existing structure and the new construction of a five-story building. The 100% affordable housing development will include a total of 58 units, with 12 in the renovated building and 46 in the new construction. The ground floor of each building will feature retail space, with Dollop Coffee leasing in the restored building and a bank branch intended for the new building.

Since the project was chosen for the RFP, the design has undergone multiple revisions. The massing reflects its context, using a two-part expression of a brick staggered base volume topped by a stepped aluminum-clad mass. The building holds the corner while the overall plan links the two buildings with a courtyard that gives access to both buildings’ residential entries.

Rising 72 feet, the new building has been planned to reach a passive house certification, becoming the city’s largest passive house structure. The project will use optimized windows, thermally broken balconies, and R-25 effective wall insulation to help achieve the status. The development will also improve indoor air quality by avoiding gas stoves and will be topped by solar panels on the roof.

While still undergoing design, the courtyard is being envisioned to have a sort of linear path through a grove of shade trees to access the residential entries. With the landscape design being led by Omni Workshop, the outdoor space will include outdoor seating for the coffee shop and an art wall at the back of the courtyard. 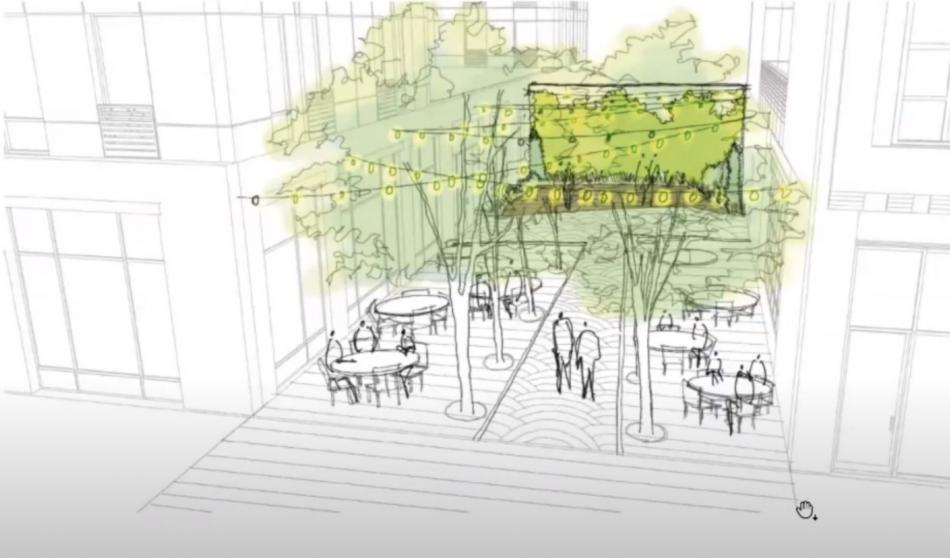 In the discussion portion, committee members expressed some concerns about the massing of the new construction. Anne Thompson expressed concerns about the top of the building, asking why the portion without fenestration was so large. The architects responded saying that it is currently there for the extra mechanicals needed for the passive house rating, but they also feel it is too heavy and are trying to solve it. Sara Beardsley agreed that the top felt too heavy and the lack of activity at the penthouse is not very desirable.

Committee members also expressed concern over the exterior material palette of the design. Reed Kroloff commented that the brick portion looked very literal and questioned why the design went further and further away from an abstract use of brick. The architects acknowledged the comment and said that they’re still working through facade studies and conceded that they may have gone too far to the literal side.

Brain Lee questioned whether this facade treatment was imposed by the planning department or if it came from the architects. Implying that the design was potentially disingenuous, he commented that there is a certain kind of confusion between the two parts of the facade as it starts to look like a new portion building on top of an existing brick base, which is not the case. The developer responded and conceded that this is a fair point to bring up. They discussed the different considerations of how far to go with the artistic expression, construction costs associated with the design, and needing to meet sustainability goals. They said it's fair to challenge them with how much of a push and pull there should be with the design and that a middle ground would be best for the ultimate design of the form. 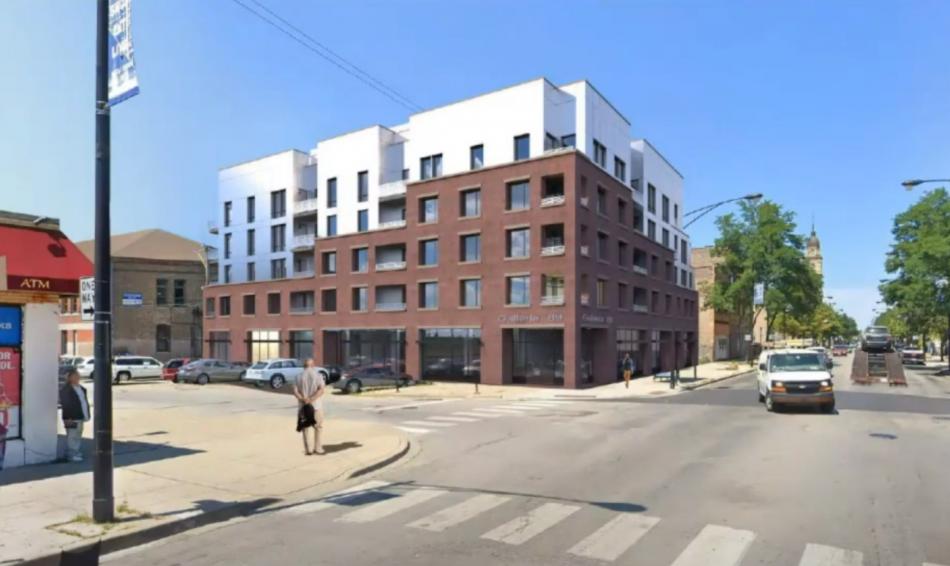 Committee members also discussed the project’s courtyard and its viability. Juan Moreno criticized the plan’s lack of a clear entry for both residential components, stating that the development team needs to consider the sense of entry and it is currently hard to see or find the entrances. Renauld Mitchell encouraged the development team to consider concerns about personal safety in the courtyard and think of sightlines in the space. The team commented that security is one of their top priorities and they want to make a safe space without prohibiting access. Hana Ishikawa brought up concerns about outdoor furnishings and whether they would be moveable or stationary, with different concerns associated with either option. A representative from Omni Workshop commented that they have been having conversations about the decision about seating options and final decisions have yet to be made.

With comments from the Committee on Design, the project will move forward through the approval and review process. It is unclear to what extent the project will need city approvals, but a hearing in front of the Community Development Commission is likely, since the project includes a currently city-owned lot. A timeline for the project has not been announced.