Originally revealed by Urbanize last month, the multi-tower development surrounding the former Salvation Army building, now dubbed NOMA, has been reviewed by the Committee on Design. The mixed-use project will occupy a collection of sites all generally bound by N. Desplaines St, W. Hubbard St., N. Halsted St, and W. Ohio St. The project will convert the Salvation Army building into a new hotel and build an approximate 1,500 units of housing across four buildings paired with extensive retail and food/beverage space. 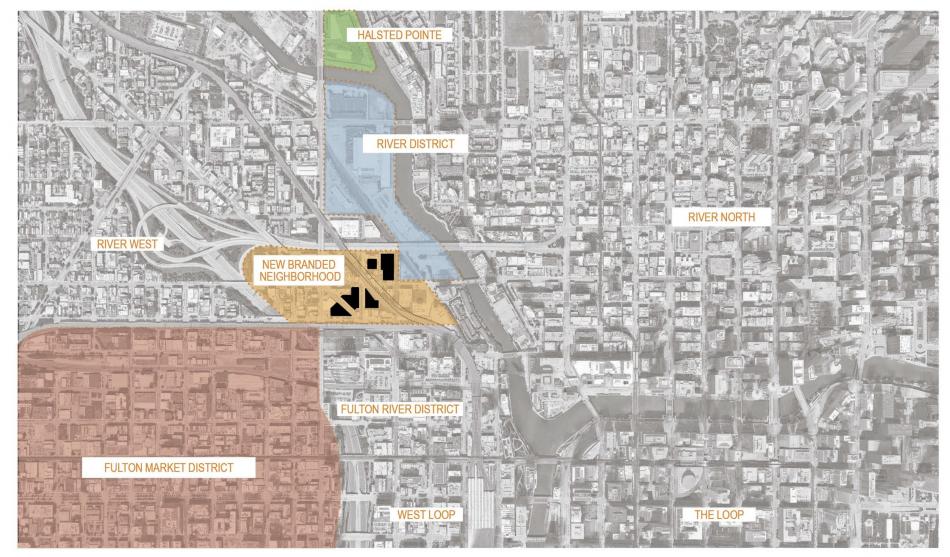 Conceived by Shapack Partners, NOMA is the anchoring development within a new branded neighborhood that sits between Fulton Market and the River District with the future casino. A high importance is placed on the public realm, with extensive plans for the pedestrian experience and the shaping of the ground floor programming to activate the district.

With Eckenhoff Saunders Architects tapped for the conversion of the Salvation Army building, the six-story structure will be converted into 141 hotel rooms. The primary facades will be preserved, with a small two-story addition added to the southern half of the building. Clad in contemporary metal, the addition will allow for destination dining and hotel amenities. Once revitalized, the building will be able to anchor and contribute substantially to the new district. 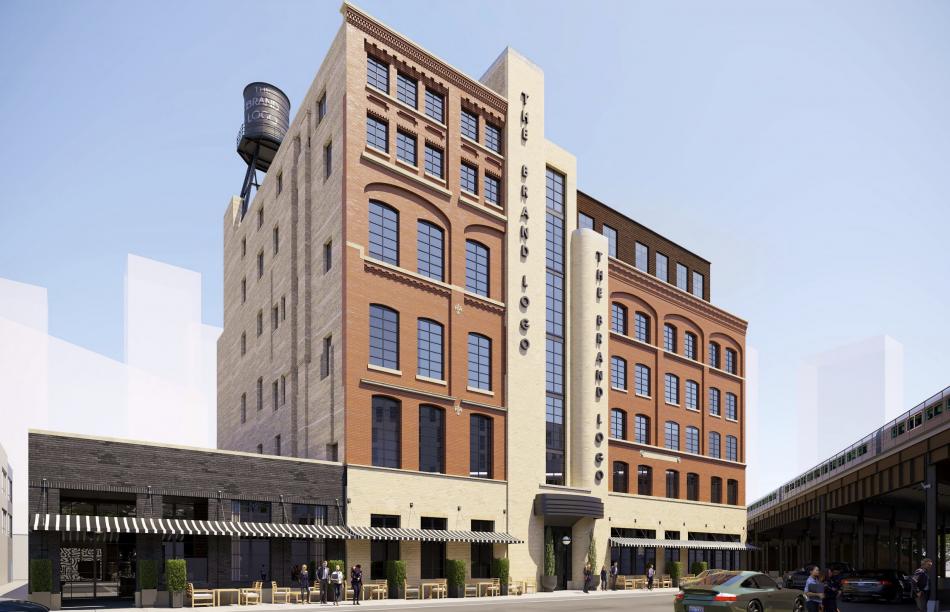 For the new construction, New York-based ODA has been brought on board to begin conceptualizing the project. The organization of the new towers step down from the tallest tower by the W. Ohio St ramp at Parcel G to Parcel A, the shortest tower, near the intersection of W. Grand Ave, N. Halsted St, and N. Milwaukee Ave.

First designing Parcel G, Eran Chen of ODA waked through three concept massings that the firm has developed. The first looks to build a tall, slender tower that steps back away from W. Grand Ave to create a vertical anchor along W. Ohio St. This initial massing creates a nice tower portion but results in a heavy base. The second massing splits the volume into two shorter towers on top of a podium, reducing height and creating a gateway view to the Salvation Army building. This iteration creates a more significant wall at the lower levels with such a large podium. 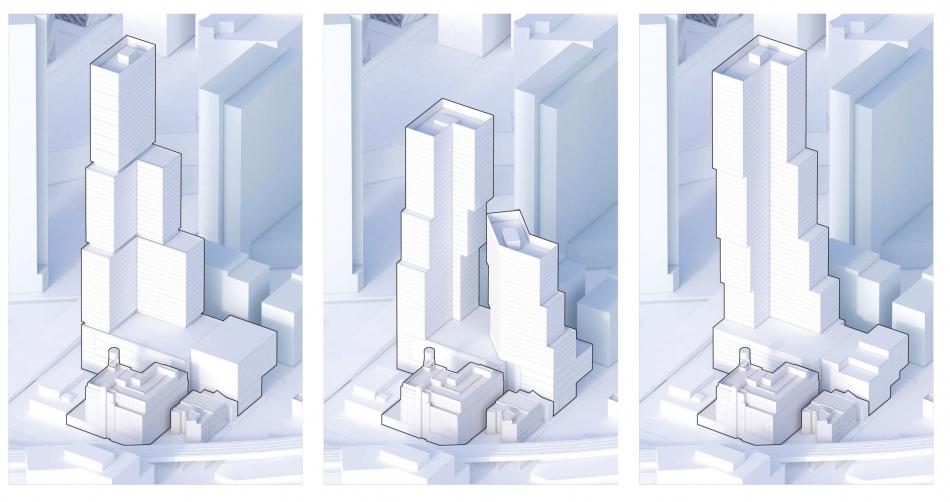 The third volume is very similar to the first concept, however it uses an L-shape that shifts as it rises, creating setbacks on one leg and cantilevers on the other leg. This version creates an elegant structure with a very dynamic form viewed at all angles. The strong form for this option can be appreciated from far away and can become the anchor for the neighborhood.

At the pedestrian scale, the urban plan calls for extending the public realm across the sites and through the streets. Connecting the sites, an art walk and park would be envisioned for W. Hubbard St in collaboration with the city. An art walk within the development will begin at the Salvation Army Building and continue down N. Union Ave to connect to the southern sites which will use the Mews concept from Shapack Partners’ previous projects at 167 N. Green and 170 N. Green to lace the sites together and create an active pedestrian experience. The meandering spaces will offer food and beverage options as well as retail spaces. A grand cultural institution, placed at W. Grand Ave and N. Desplaines St will connect the development and create a cultural anchor for the project that will enliven the entire community. 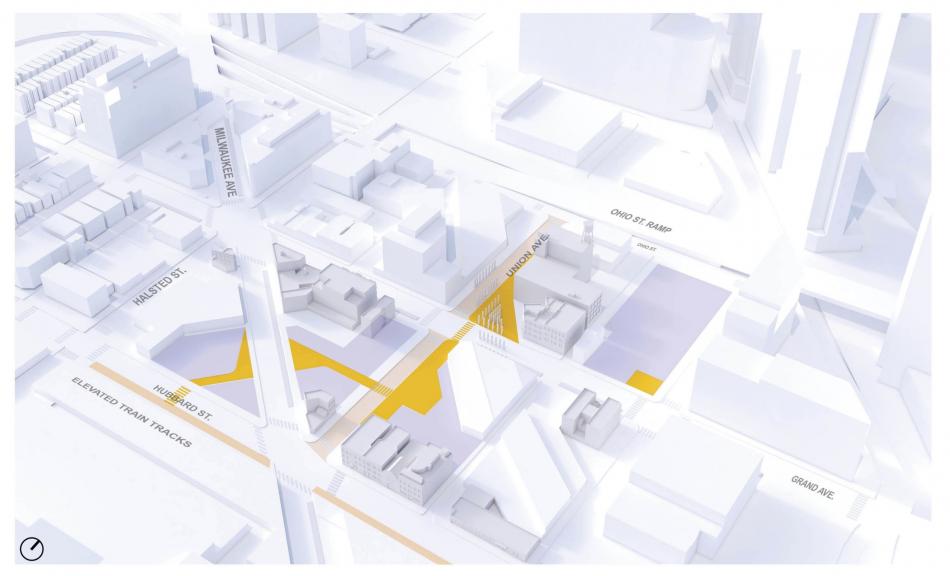 The discussion began with Ann Thompson who appreciated the emphasis on adaptive reuse and the preservation of the Salvation Army building. Thompson posed the question of whether the project team had considered contributing public green space to the project. The development team responded that green space would be a part of the Mews’ and plazas and could be integrated through the linear park along W. Hubbard St. Thompson implied that entry plazas and plantings within hardscape plazas may not be sufficient and that a grassy, green pocket park would be ideal.

Committee member Hana Ishikawa also chimed in to support Thompson’s comment about green space, reflecting on her own experience from living in the area and walking her dog in a parking lot. Ishikawa also asked whether the development team has consulted CDOT regarding the midblock crosswalks. Jeff Shapack responded that they are in conversations with CDOT who have guided them to remove the crosswalk across N. Milwaukee Ave and are moving forward with plans for a midblock crosswalk over N. Union Ave. 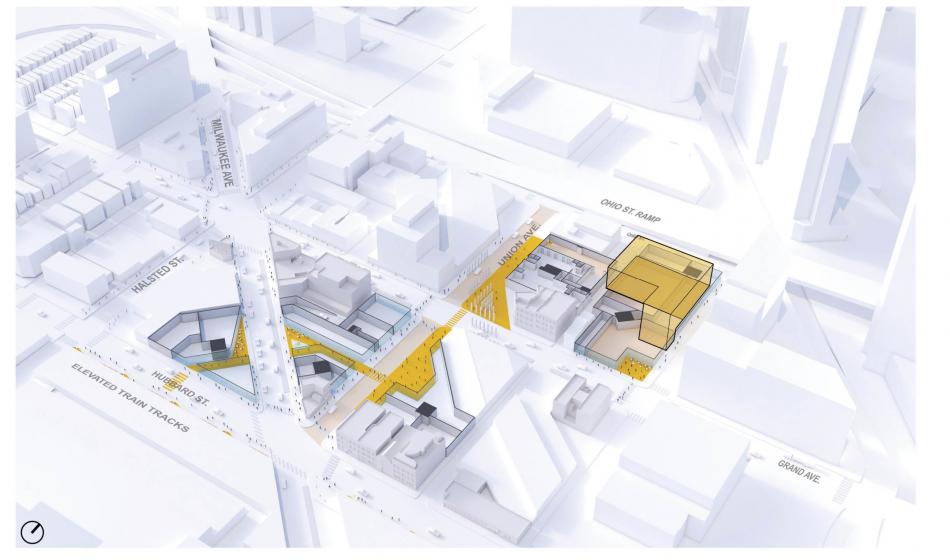 Lesley Roth chimed in to comment that as they navigate designing within this challenging space full of infrastructure, the design team should try to rely less on intra-building connection and focus on the vibrancy of the streets to create a more vibrant public realm without going into the site. Jeff Shapack responded and commented that by building Mews they are avoiding the Chicago history of building lot line to lot line and this approach of public space on their private land is opening space up to the public that would have otherwise been closed off from those users.

Juan Moreno made comments about the site’s unique position in the city as a point of multiple arrival and departure access points. Moreno encouraged the design team to consider all of these access points and study views along those corridors. With this as a fringe site inside the city, Moreno also challenged the team to forgo the typical references to the past and old materials and use this site as a chance to start a new design conversation and push it in a direction the city hasn’t thought of before. 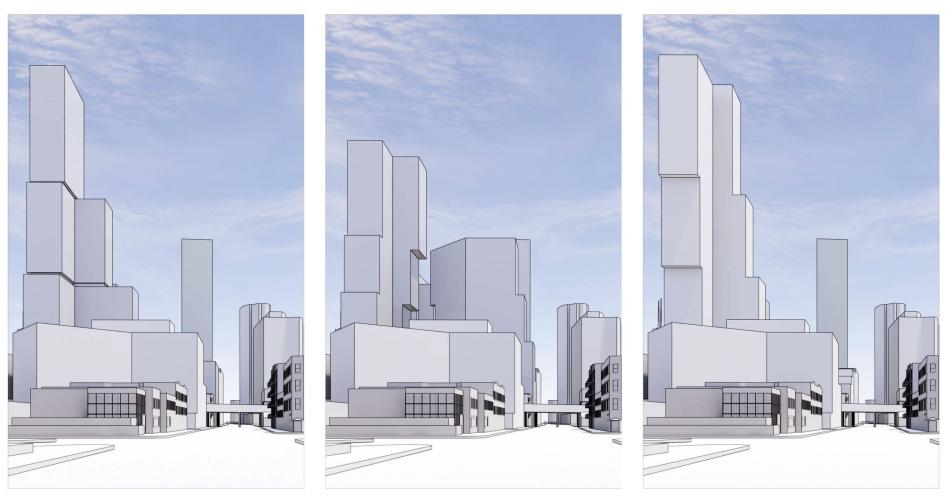 Brian Lee commented that the key to the project is multiple levels of connectivity paired with a strong identity. Lee challenged them to push the city on what they can do with a bold idea about new urban space. Personally, Lee prefers the single tower massing over the two-building massing which, in his opinion, would create an urban wall that places people too close together vertically.

John Ronan finished off the discussion portion by stating that he feels that the test for the viability of this project is to see how the development can be more than just a sum of its parts. Ronan also criticized the lack of pedestrian scale views to communicate the public realm ideas that were discussed.

With the zoning application filed last month and this hearing before the Committee on Design, the massive project inches forward through the city approval process. Situated in the 27th Ward, Shapack will likely engage in multiple community meetings with the public to get feedback. Regarding city approvals, the plan will still need to go before the Chicago Plan Commission, Committee on Zoning, and ultimately the full Chicago City Council.