Chicago is a city of neighborhoods, each with its own unique identity and personality. When developers, architects, and designers are imagining - or reimagining - the interiors of residential buildings, they often pull inspiration from their surrounding context as reference to create environments in which residents feel “at home” and connected with their surroundings. As we wrap up 2021, let’s look at a few projects that exemplify place-inspired design: 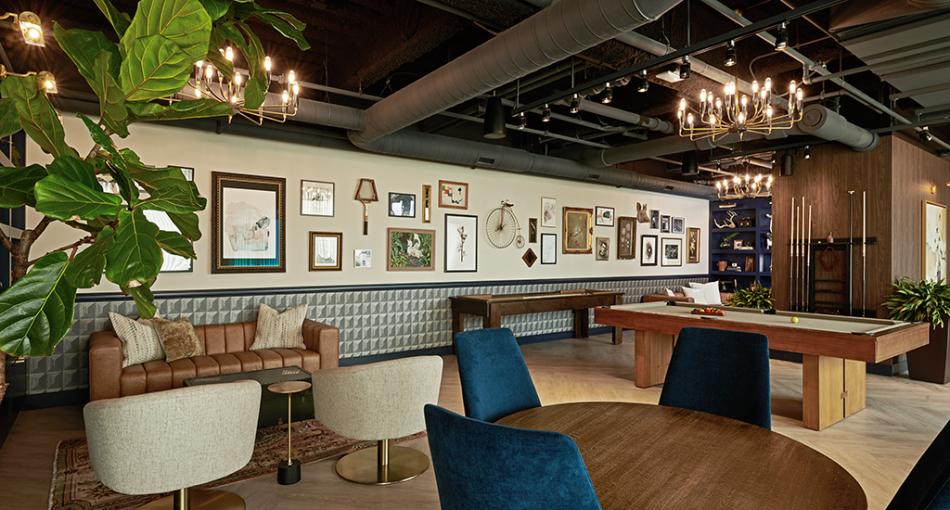 At the Logan Apartments, a project co-developed by Fifield Cos. and Terraco Real Estate, Brianne Bishop Design incorporated the character of the neighborhood by repurposing found objects, antiques, and salvaged pieces from the former Mega Mall. Wallpaper from locally based Relativity Textiles in the amenity space restrooms, as well as photos of street art that used to be in the Mega Mall, help anchor the spaces in the neighborhood’s past and present. Located in Logan Square, a map of the neighborhood covers an entire wall of the conference room in the building’s remote-work space, furthering the sense of place. 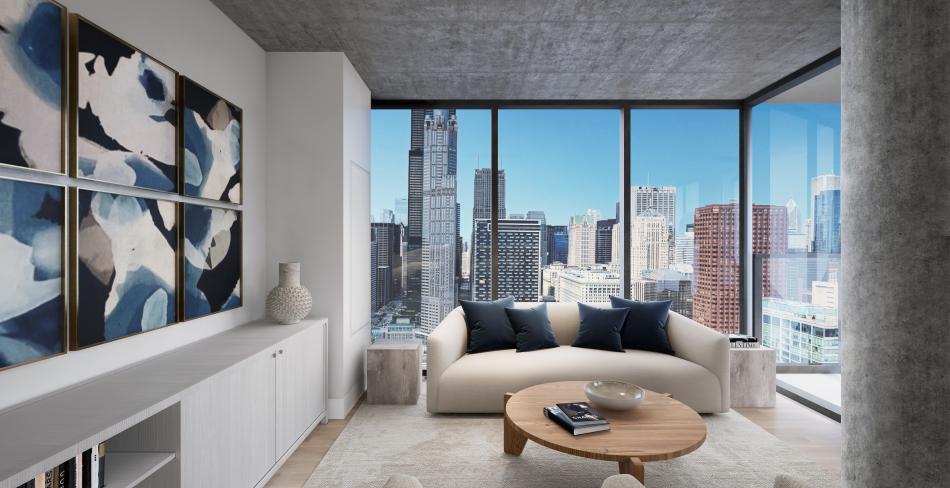 The South Loop, especially along the South Branch of the Chicago River, was once an active industrial hub. As unit designers at Kaufman O’Neil developed the concept for the condo residences for The Reed, they turned to this industrial heritage of the place. Developed by Lendlease, as part of its 7-acre Southbank development, the 41-story, 440-unit residential tower recently broke ground along the banks of the Chicago River, with condominiums that have the look and feel of a loft conversion, but with all the modern amenities that current buyers seek. Units will come with exposed concrete ceilings and columns, blackened metal mullions, and an expansive kitchen island with architectural steel legs. 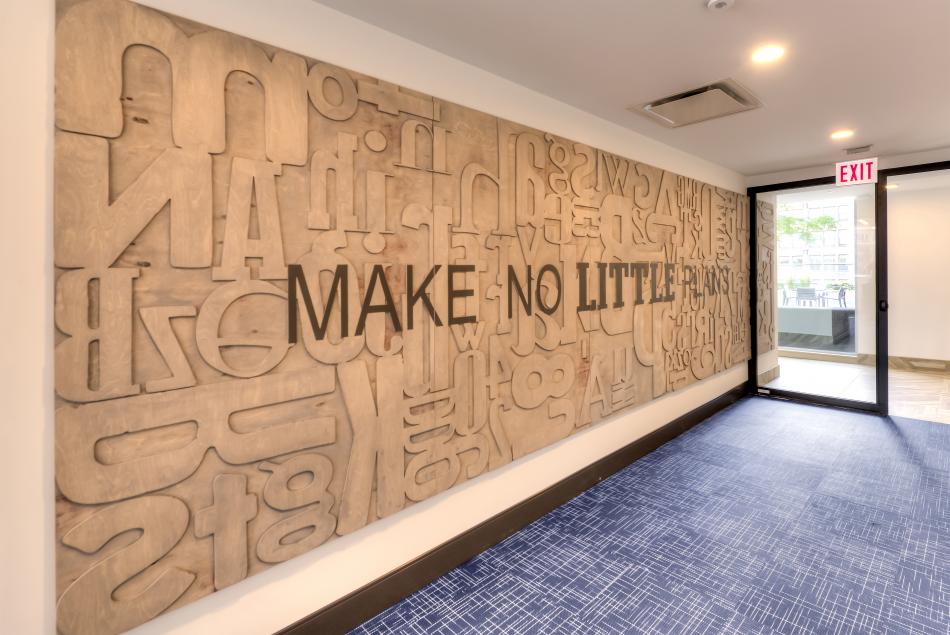 Draper and Kramer, Inc. made “no little plans” when updating the interiors at Burnham Pointe, a 298-unit rental tower that drew inspiration from the former printing facilities that gave Printers Row its name. Working with architect/designer FitzGerald Associates, the developers incorporated elements that reflect the rich literary history of the neighborhood. Old printer’s block type is featured throughout the building. Room dividers in two community areas, The Row and The Club, are modeled on printers’ trays. Newsprint wallpaper adorns the light coves over elevator entrances. While diverse in form, these design features work together to tell a brand story that’s unique to the building’s location. 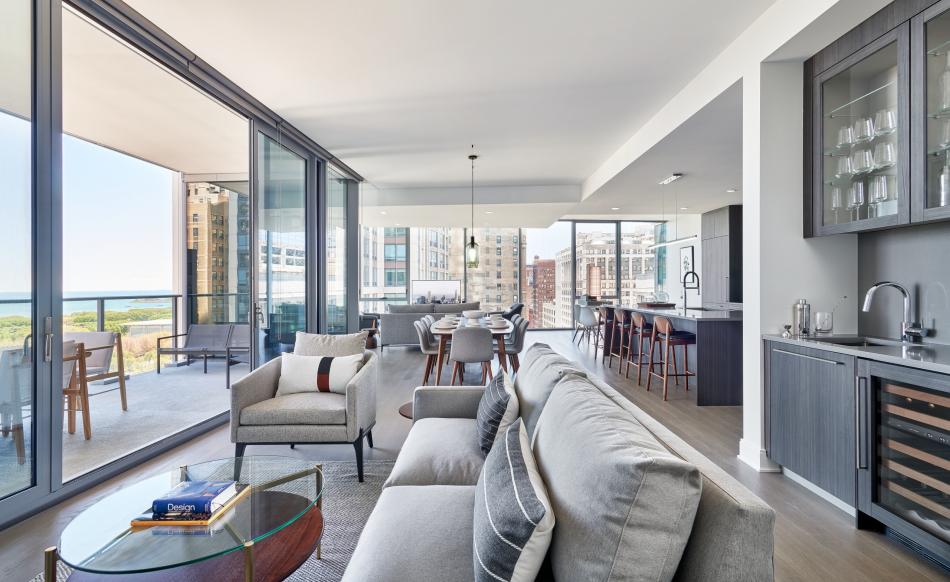 When designing Parkline Chicago on the eastern edge of the Loop, architect Thomas Roszak – partner of Moceri + Roszak, the project’s developer, and founder and principal of Thomas Roszak Architecture – sought to maximize protected views from the 26-story luxury rental tower. Residences, particularly the top 24 units that comprise the "Penthouse Collection," feature large floor-to-ceiling windows that frame spectacular vistas of Lake Michigan, Millennium Park and famed local institutions like the Art Institute and Chicago Cultural Center. A neutral color palette allows the views to take center stage, showing how place-inspired design is sometimes achieved through direct engagement with a home’s surroundings. 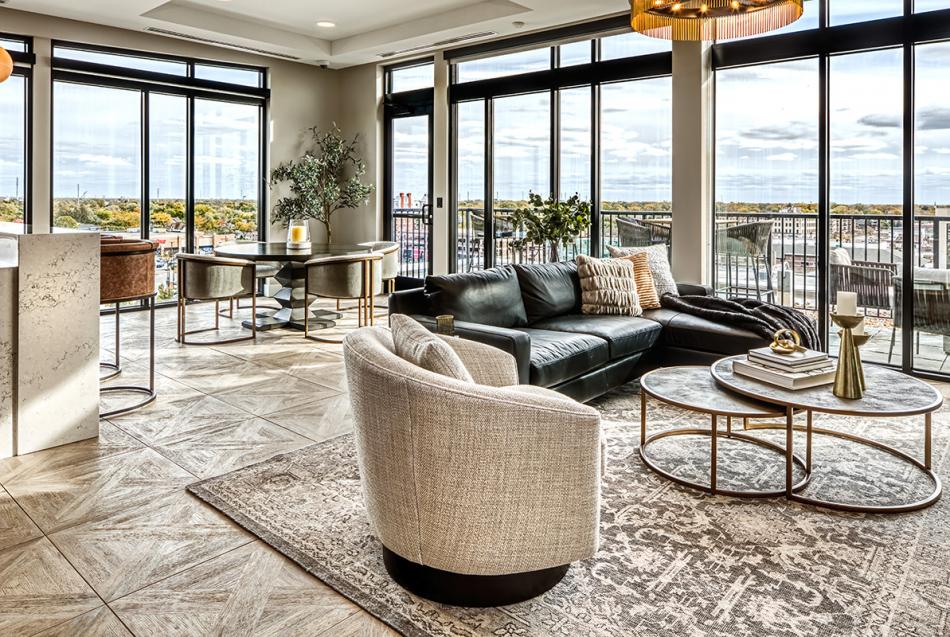 At The Fynn, a 212-unit new multifamily development in the Chicago western suburb of Elmhurst, architect BKV Group incorporated geographic inspiration into the amenity spaces with specific design elements celebrating the city’s historic past with features like a central fireplace, elm wood slats and floor-to-ceiling windows that peer out to the elm trees and city. In addition, the elements pay homage to the city’s robust and renowned Chicago architecture history through the use of black brick, rich velvet textures and glassy chandeliers hanging from the ceiling. From the indoor/outdoor eighth floor sky lounge, residents have views of downtown Elmhurst and the Chicago skyline.