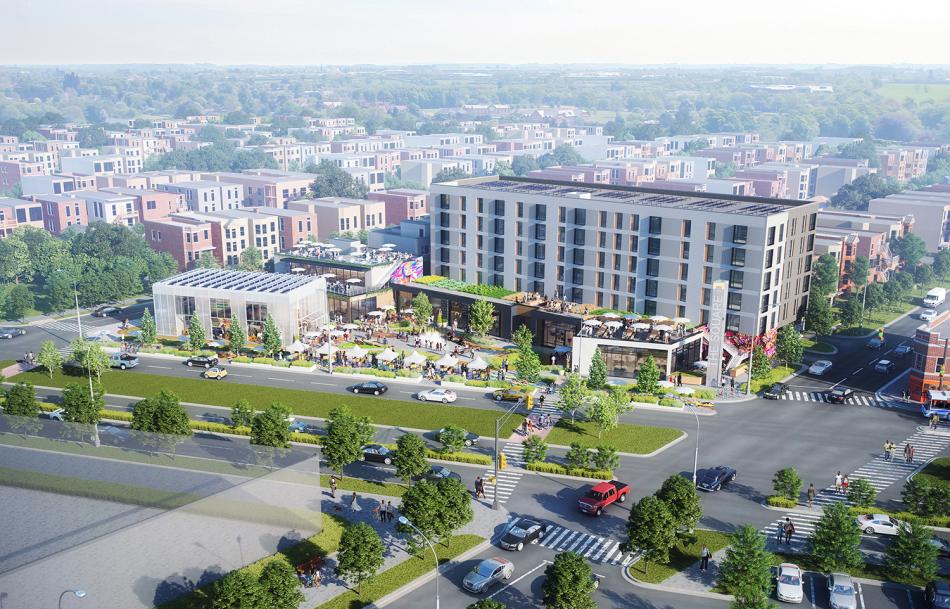 Lawndale Redefined is a $31.4 million project by GRE Ventures, Imagine Group, and 548 Development. Planned for an acre of vacant, city-owned and private land at 3400 W. Ogden Ave, the project consists of a five-story mixed-income residential building, an arts and technology center that will be operated by City Colleges of Chicago, and retail space. 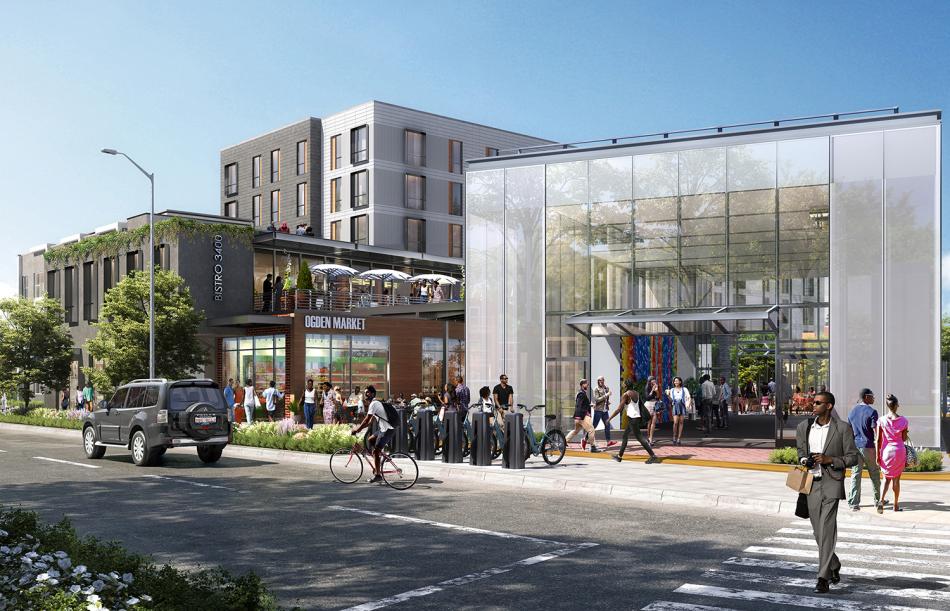 Designed by Wight & Company, the venture will produce 60 apartments as well as three for-sale townhomes that will be intended to be prototypes for future infill development. The retail and commercial spaces are expected to host a dine-in restaurant at the corner of W. Ogden Ave and S. Homan Ave, a rooftop bistro, and a small-scale grocer at W. Ogden Ave and S. Trumbull Ave.

An outdoor courtyard will offer space for the community with a splash pad, history trail, and other features for public use. The developers are working to secure financing through IDHA and finalize the funding package by the end of the year. They are aiming to begin construction in Q1 2023. 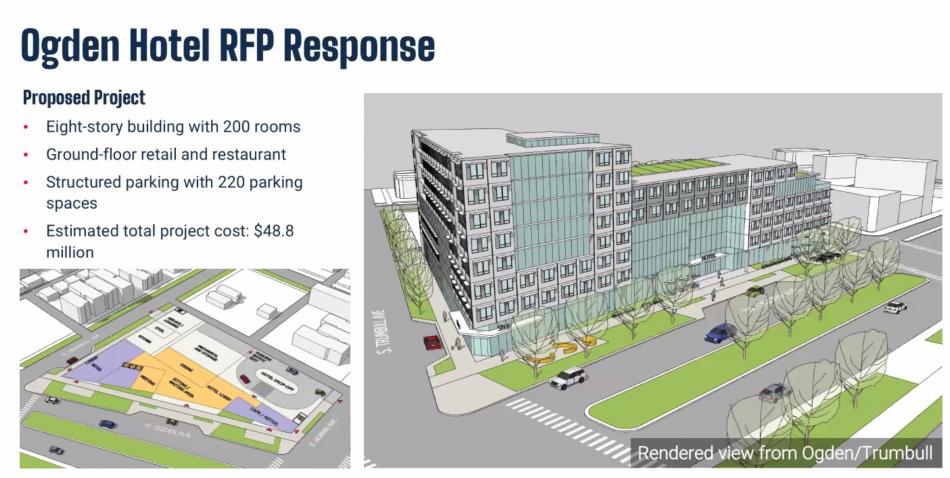 Originally a submission to the North Lawndale Invest South/West RFP, the Ogden Hotel project is being led by Proxima Management. After they were not selected for the RFP site, the development team worked with DPD to select a new site in the area to build the planned hotel. 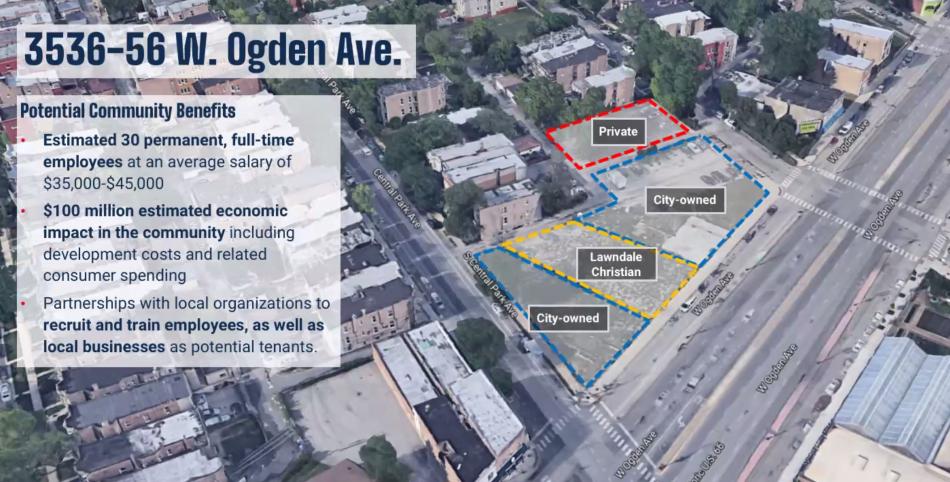 The original plan called for an eight-story building with approximately 200 hotel rooms, with ground floor retail and restaurant space. The project would incorporate 220 parking spots and feature a rooftop bar. Now sited at 3536 W. Ogden Ave, the project will be very similar to the RFP proposal.

Estimated to cost about $48.8 million, the revised project will adjust to the new site which will end up in a massing that would be potentially mirrored. The property is currently made up of four parcels, with two owned by the city, one owned by Lawndale Christian, and one owned privately. The team is working to acquire the parcels as they move forward with the project. 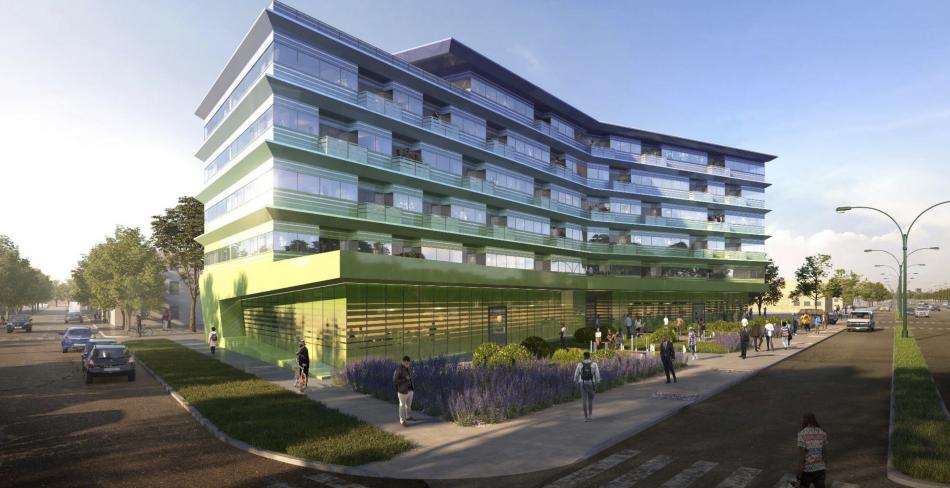 Developed by East Lake Management and Grace at Jerusalem CDC, Grace Manor is an affordable housing development at 3401 W. Ogden Ave. Sited along W. Ogden Ave, the property is currently a parking lot for the local 10th District police station.

Planned to hold 65 affordable housing units and ground floor retail space, the six-story building will deliver 46 apartments marketed at 60% AMI, including 22 one-beds and 24 two-bed configurations. The remaining 19 rentals will be fulfilled under the CHA RAD program, offering 9 one-beds and 10 two-bedroom units. Tenant amenities will include a fitness center, laundry, rooftop terrace, package room, computer room, and on-site management. 18 car parking spaces and a bike room will also be provided.

Approved by the Chicago Plan Commission in January 2022, the development team expects to wrap up final city approvals this spring and secure financing over the summer. Construction is expected to begin this fall. 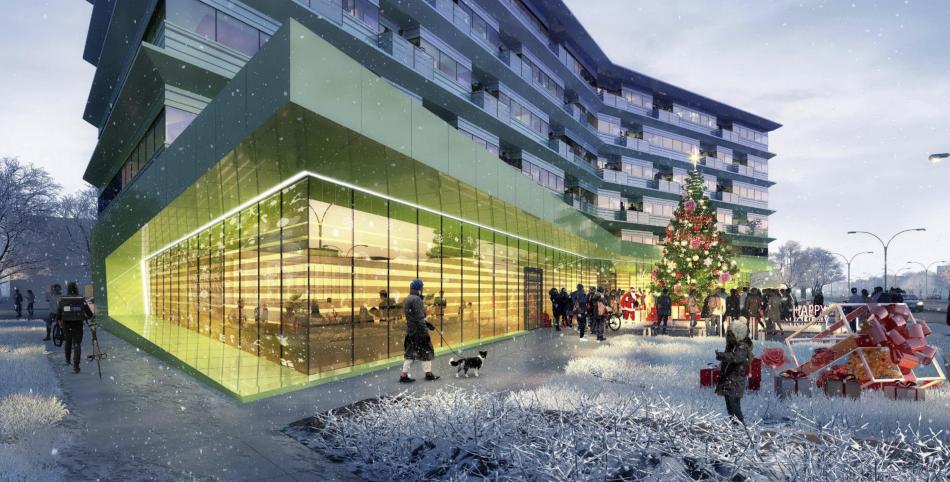 At the meeting, led by local alderman Michael Scott Jr. (24th ward) and DPD, the alderman indicated that there are more projects coming down the pipeline for North Lawndale and the Invest South/West corridor. While still in the very early stages, Lawndale Christian Development Corporation is planning an all-affordable development, while the North Lawndale Community Coordinating Council is reportedly in the efforts of getting a grocery store to open along the W. Ogden Ave corridor.