JDL Development has officially topped-off its massive, skyline-altering One Chicago project. Working high above River North, crews from Power Construction placed the final roof slab atop the 971-foot residential building, which is the taller of the two skyscrapers that make up the One Chicago complex.

"Topping out is typically a construction milestone for completing the uppermost structural elements of a building," Chris Goray, vice president of Power Construction, told Urbanize. "For One Chicago, 'topping out' consists of placing the concrete slab for the 78th level roof."

Architecture firms Goettsch Partners and Hartshorne Plunkard Architecture designed the block-sized development at 1 W. Chicago Avenue at the site of a longtime parking lot located across from Holy Name Cathedral. The fast-rising project broke ground in early 2018 using a "top-down" method in which the basement levels were simultaneously excavated as the towers above went up. 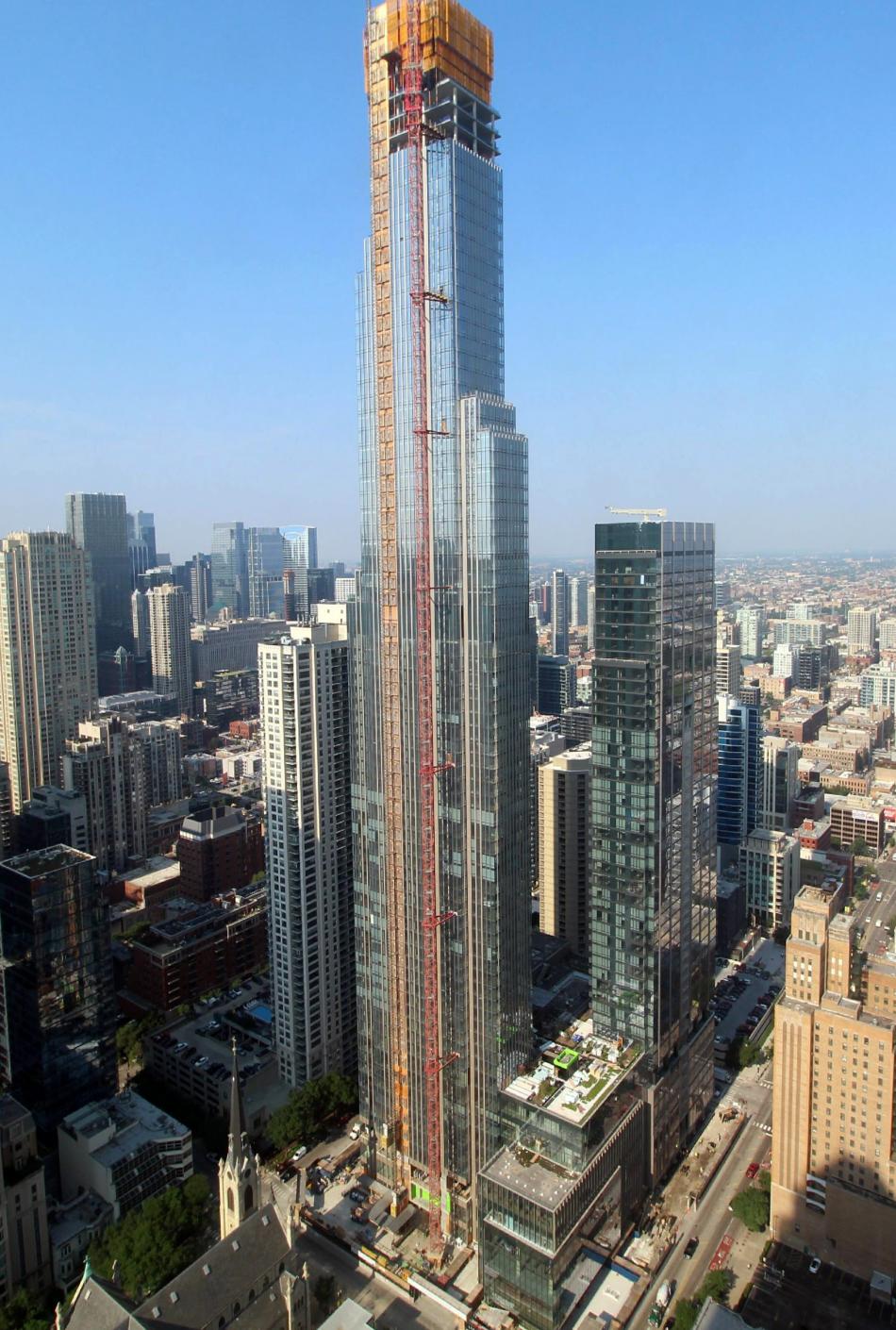 "It is amazing to reflect back to 16 months ago when the building was just a small hole in the ground," Goray added. "Fast forward to now, over 2.1 million square feet of construction has been put in place, which is even more impressive that it was done during the COVID-19 pandemic."

Despite reaching a key milestone, there's still plenty of work left to do on the tower's crown. "We are excited to top out the building this week with a concrete structure intended to house some important building elements," said Patrick Loughran, a principal and senior project architect with Goettsch Partners. These elements include cooling towers for the mechanical systems, elevator equipment, and a telescoping window-washing rig known as a Building Maintenance Unit (BMU), Loughran said.

The top of the skyscraper is also home to a pair of Liquid Mass Damper (LMD) tanks used by structural engineer Magnusson Klemencic Associates to counteract wind loads and limit how much the near-supertall tower sways. The amount of water in the tanks will be periodically adjusted or "tuned" to match the wind forces acting upon the building to ensure its residents remain comfortable despite being almost 1,000 feet in the sky. 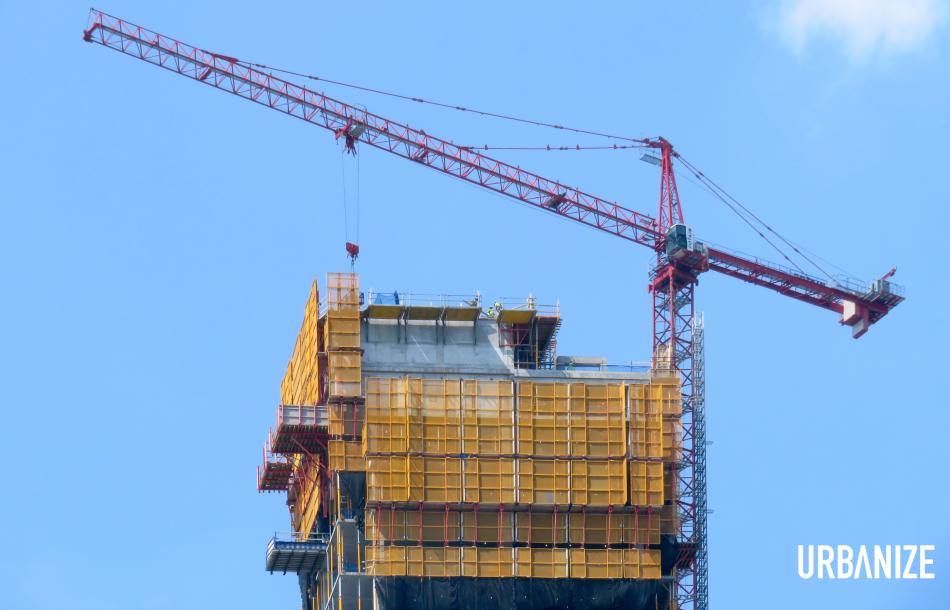 This concrete structure at the top of the building will be shielded behind a glass screen wall.Jay Koziarz/Urbanize

All of the rooftop equipment will eventually be screened behind an architectural parapet resembling a vertical continuation of the building's glass and metal curtain wall. "[The parapet installation] should happen in the coming weeks," Joey Letchinger of JDL told Urbanize. "There will be various lights on and around the parapet, but the idea is for the clean vertical lines of the building to fade off toward the top."

When complete, One Chicago will feature a total of 735 rental apartments and 77 for-sale condominiums across its two high-rise towers. The base will contain 1,100 above- and below-ground parking spaces, 55,000 square feet of offices, a restaurant and event space, a Whole Foods, and a Life Time athletic club with an NCAA basketball court and four swimming pools. Amenities include multiple lounges, demonstration kitchens, golf simulators, a putting green, and a 120-foot-long elevated dog park. Residents will also have full access to the aforementioned Life Time club. 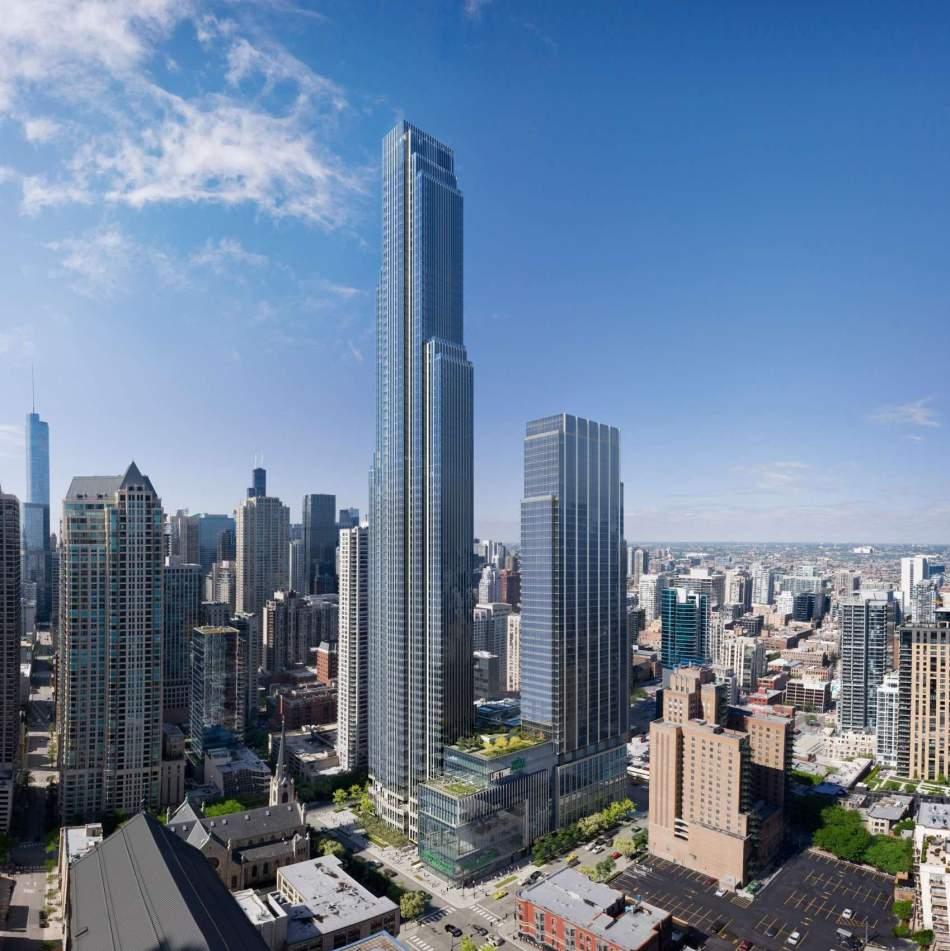 A rendering of the completed One Chicago complex. Goettsch Partners/Hartshorne Plunkard Architecture

There are four distinct housing "types" within the One Chicago development—each with its own name, finishes, and pricing. In the taller tower, there are the "One Chicago Apartments" which are topped by luxury condominiums known as the "One Chicago Residences."

The development's shorter 49-story building contains the "23 West Apartments," which get their name from that building's entrance at 23 W. Chicago Avenue. A collection of industrial-inspired rental units line the parking podium along Chicago Avenue and Dearborn Street and are known as the "23 West Lofts."

The 23 West Apartments and 23 West Lofts are both on track to welcome renters in October. The One Chicago Apartments will open at the end of this year or early next, followed by the One Chicago Residences in the first half of 2022.