The Commission on Chicago Landmarks has approved the preliminary landmark designation for the Pioneer Arcade. Located at 1535 N. Pulaski, the building was designed by Jens J. Jensen and built in 1924-25. With an impressive terracotta facade, the building is one of the last of Chicago’s commercial recreation center buildings. Holding bowling lanes and a billiards hall, the building was a center of neighborhood commercial activity for decades.

As proposed, the designation states that the building meets Criterion 1 for its value as an example of city, state, or national heritage. Bowling and billiards were the staples of entertainment in the late 19th century and early 20th century. Chicago was the midwestern center for the national indoor sports movement, hosting the first modern bowling tournament in 1901 and one of the first billiards world championship tournaments in 1916. Allen Hall, a well-known billiards competitor, made Pioneer Arcade his signature establishment, raising its profile with well-publicized tournament games. 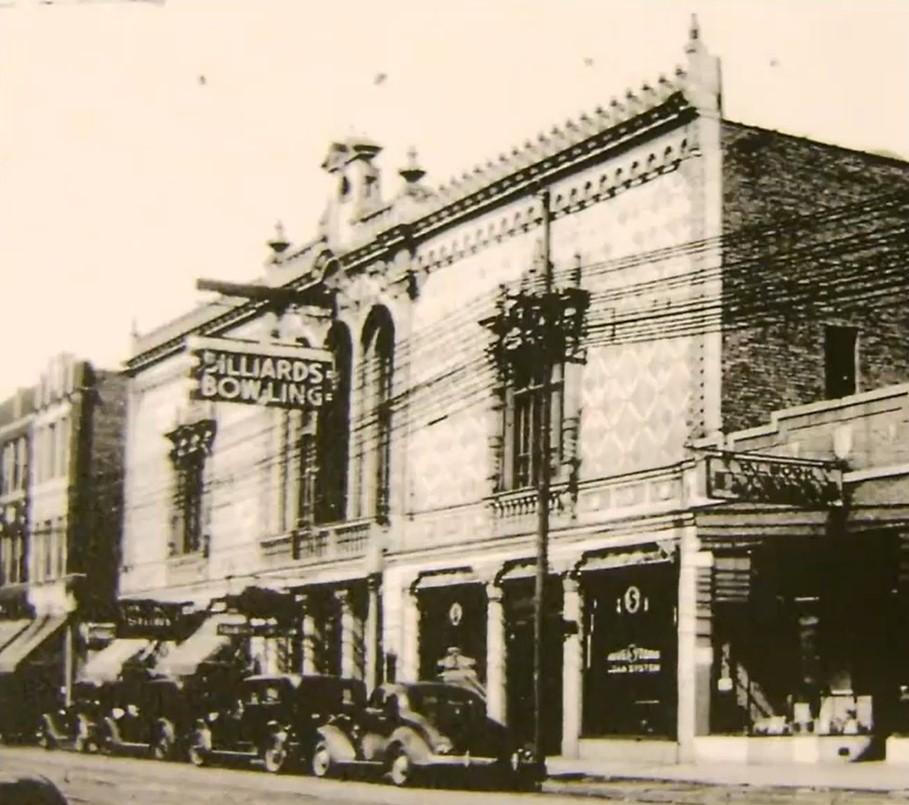 In 1924, the Chicago Tribune reported that the Pioneer Arcade would be “one of the city's finest” and would be “one of the most elaborate recreation buildings in the city”. Opening in 1925, the ground floor was home to four shops and 35 billiards tables. Upstairs, the second floor was home to 16 bowling lanes with a spectator platform looking down onto them. The recreation building thrived as a bowling and billiards hall, becoming a long-term fixture in the social life of Humboldt Park.

The second landmark criterion for the building is Criterion 4, for exemplary architecture. As one of the grandest sports halls from the 1920s, the building is an outstanding example of a district commercial building, designed in a version of Spanish Baroque Revival style called Churrigueresque, which refers to the most ornate examples of the overall style. Key elements include the twisted columns, the forms of classical architecture, and the exuberant ornament on the facade, especially above the main entrance. Jens J Jensen was the architect of the building. 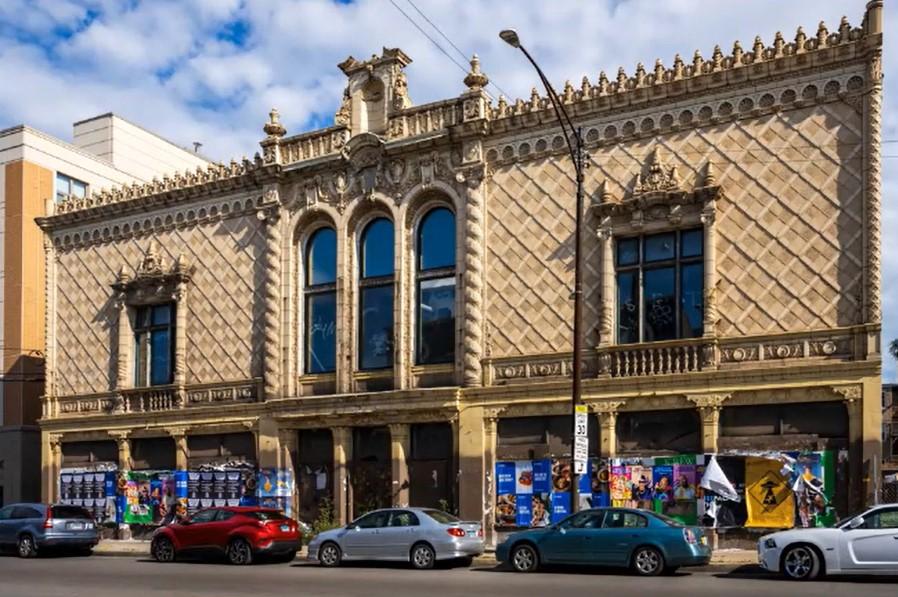 In its current state, the building’s exterior is mostly intact, with only very minor alterations to the main facade. On the interior, the bowling lanes and billiards hall have been significantly altered with no historic significance remaining. In an unusual circumstance, the building came before the commission with a redevelopment plan to demolish the back portion of the building and use the front section as part of a new development by Hispanic Housing Development Corporation.

With UrbanWorks serving as the architect, the plan calls for the restoration, repair, and integration of the front 35 feet of the Pioneer Arcade, with the rear 85 feet set to be replaced with six stories of senior housing. This new addition will be setback significantly from the street and a new building planned for the vacant site south of the Pioneer Arcade will also be setback from the historic building for visual relief. The muted palette of the new design does not aim to compete with the Pioneer Arcade facade. 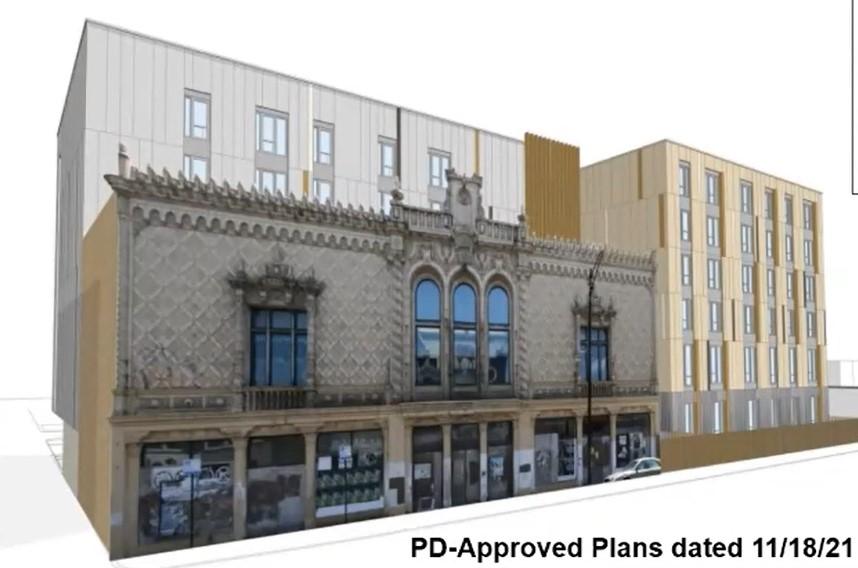 The developers have received site plan approval from DPD under the property’s existing Planned Development and came to the Commission on Chicago Landmarks consenting to the designation. While a designation usually covers the entire building, there are precedents for the landmarking of a building where it is partially demolished for new construction.

As such, the landmark designation will protect all exterior elevations including rooflines, with some additional guidelines and conditions. The designation will recognize the preservation of the north, west, and south elevations 35 feet into the property up to and including the wall of the central stair. The owner may seek demolition of the rear 85 feet of the structure and the commission will approve it given that the front portion is retained, restored, and repaired. The designation will also include the approval of the six-story addition on the site. 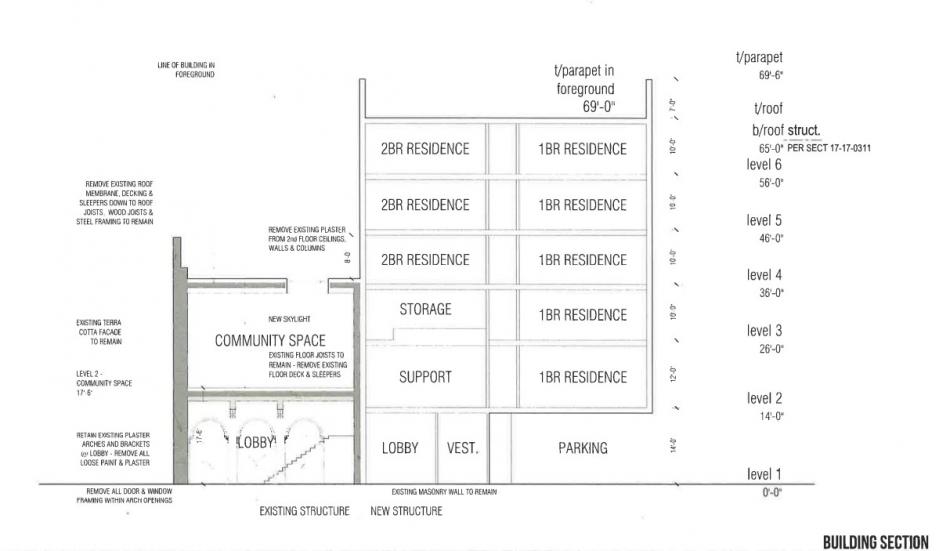 Next steps for the project include a vote on the final landmark recommendation by the Commission on Chicago Landmarks likely in a couple of months, with the recommendation then heading to City Hall for approvals from the Committee on Zoning and City Council.