A proposal from developer Novak Construction to redevelop the former Portage Park Sears location into a mixed-use complex won the crucial support of the Chicago Plan Commission. The $90 million project would reuse the commercial structure at 4730 W. Irving Park Road in the Six Corners shopping district, which has sat vacant since closing in July 2018.

In addition to repurposing the former department store, the plan would construct a five-story residential wing to the north. The existing building would be reclad with new patterns and window openings to evoke art deco architecture, and the "lantern" window on the corner would be rebuilt. The combined structures would be topped by a sixth-floor glass-enclosed amenity level as well as an outdoor pool. 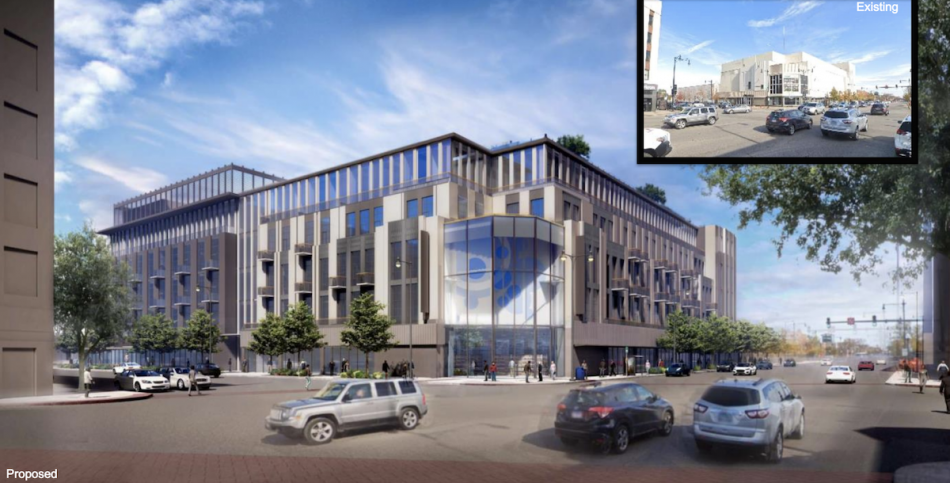 The development would deliver 50,000 square feet of commercial space, 207 rental units, and parking for 275 automobiles and 207 bicycles. Only six (2.5 percent of the total) units will be offered at an affordable rate. The developer will pay roughly $2 million into the city’s Affordable Housing Opportunity Fund to satisfy city requirements.

Chicago Planning Commissioner Maurice Cox praised the development team for working with his department to increase the pedestrian orientation on all sides of the project. "This will set the tone for what will happen on the adjacent parcels," said Cox. "It could go either way: [the adjacent parcels] could become much more suburban and car-oriented or it could continue this pattern that is being set by the Sears [project]."

Novak aims to break ground on the Sears redevelopment next spring. Construction is expected to take roughly 18 months to complete. The project will rise just across the street from the recently topped-off 10-story Clarendale Six Corners senior housing development.