As part of the two-year anniversary of Invest South/West, Mayor Lori Lightfoot announced the winners of three more RFP’s, including the South Shore RFP. This RFP, as well as the other two, were selected from a pool of developer responses that came after the RFP’s were announced in April by the Department of Planning and Development (DPD).

Developed as a joint venture between DL3 Realty, Revere Properties, and Claretian, Thrive Exchange was selected as the winner out of two submissions. Designed by KOO, the proposal is planned for multiple sites adjacent to the Cheltenham station on Metra Electric’s Main Line located near the intersection of E. 79th Street and S. Exchange Avenue. 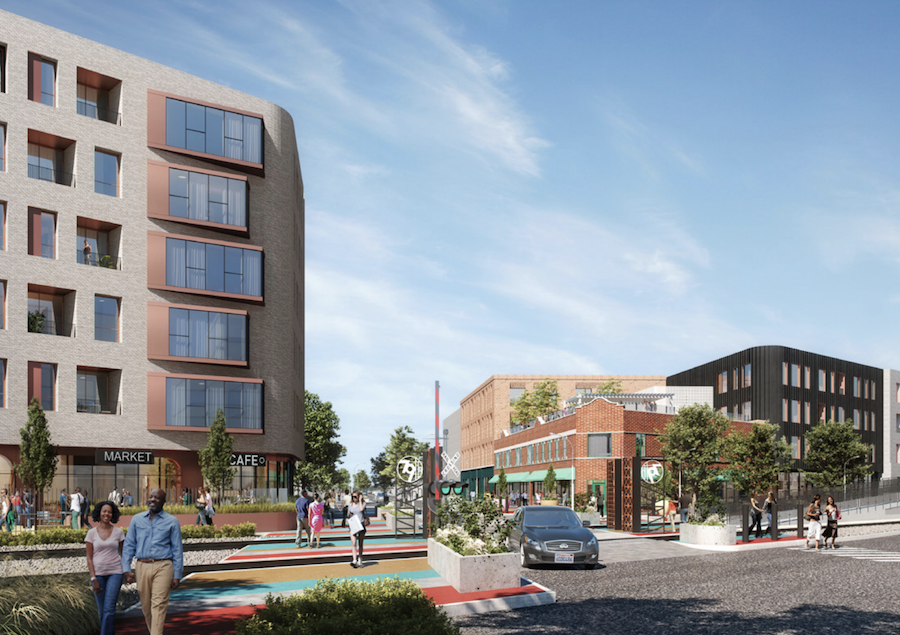 The $47.3 million development will produce a mixed-use project, creating 39 residential units on the south side of E. 79th Street in a new building. The historic Ringer Building will be converted into commercial space, including potential retail and restaurant uses as well as a community health center. The second new structure will rise to the north of the Ringer Building, holding 24 for-sale condominium units.

The winning design will need to go through refinements via an additional community engagement process before going through the official review and approval process of the city. Approvals will potentially be required from the Community Development Commission, Chicago Plan Commission, Committee on Zoning, and the full Chicago City Council. A hearing in front of the Committee on Design is also expected. Construction is reportedly expected to begin by Fall 2022.