A long-rumored infill Metra rail station for the booming Fulton Market District could be constructed just west of Odgen Avenue—that is if funding can be found.

New details on the transit project emerged at a virtual community meeting to discuss a 19-story life science development slated for nearby 400 N. Elizabeth Street. Chicago developer Mark Goodman said the Chicago Department of Transportation (CDOT) requested his building include a pedestrian greenway along a vacated stretch of Kinzie Street to connect to the future station, which would be located on the opposite side of Ogden in between the two sets of Union Pacific tracks.

"They have designed—and they asked us not to share the rendering, but I can describe it—a platform that runs from Ogden all the way to Ashland so that the Metra station could connect with the CTA line at Ashland," Goodman said. "I think would be a very positive benefit for the community." 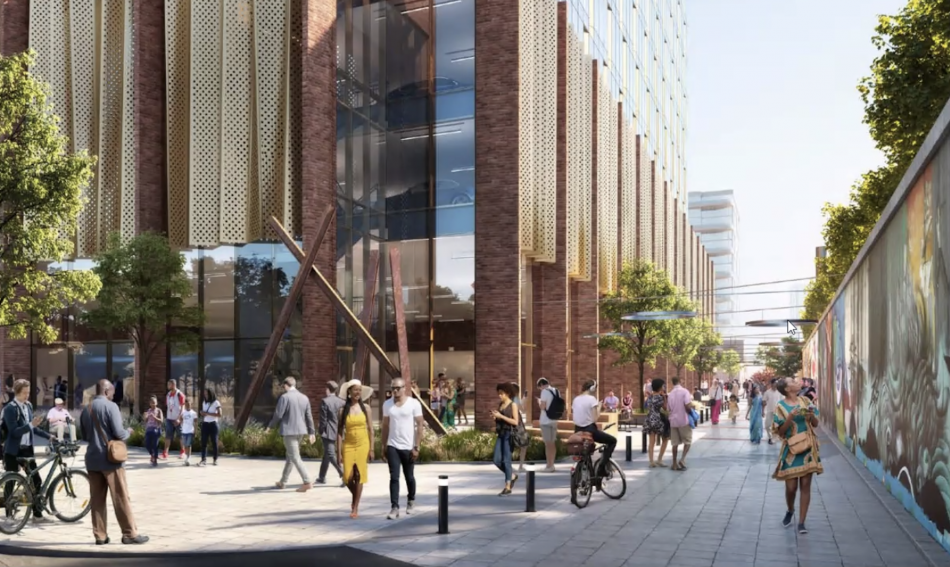 CDOT asked the developers of 400 N. Elizabeth to include this pedestrian greenway along Kinzie to connect to Ogden and the future Metra stop planned across the street. Solomon Cordwell Buenz

Ald. Walter Burnett Jr. (27th) confirmed that early planning for the new station was underway. "We've allowed the Planning Department to use TIF money to do the Metra station study," Burnett said. "They found that this would be the best area to do it."

The city's recently amended Fulton Market Innovation District Plan also identified the need for a West Loop Metra infill stop. The planning document, however, recognizes that construction on the new station will be dependant on securing the necessary funding as well as Metra updating its 1930s-era A-2 switching station, which creates a bottleneck within the current rail system.

"We have to find out where funding is going to come from, and we're working in coordination with the state and Metra in order to do this," Burnett told residents Tuesday. "Several developers in the community actually want to contribute to the station because they feel that it would help a lot of the businesses in the community."

The northwest corner of Fulton Market—where the new station is proposed—has already welcomed a slew of new office buildings and has seen a flood of upcoming apartment projects after Burnett reversed his ban on residential development north of Lake Street earlier this year. 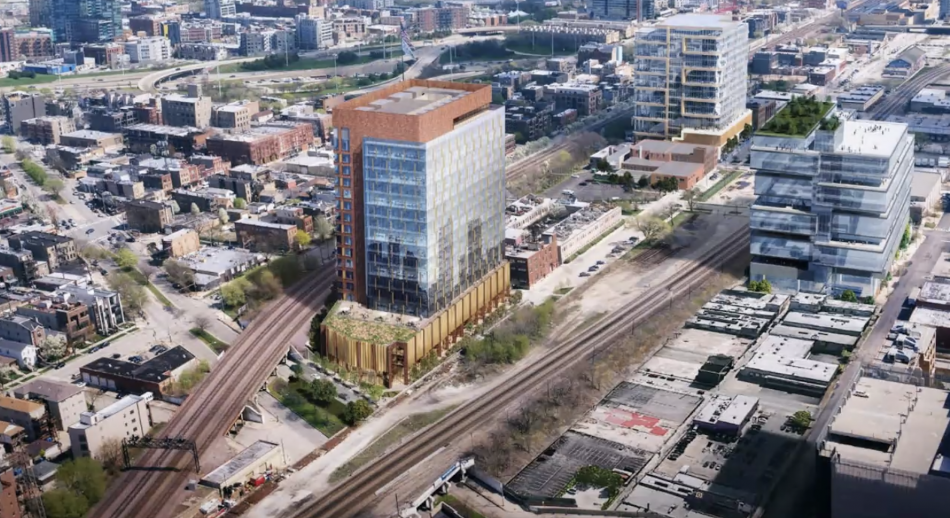 The proposed Metra stop would be located in the lower-left corner of this rendering, between the tracks and west of Odgen. The image shows 400 N. Elizabeth (center), 1200 W. Carroll (right), and Fulton Labs (upper right).Solomon Cordwell Buenz

In addition to the 400 N. Elizabeth proposal, the surrounding area has several major developments in the works including the topped-off 16-story Fulton Labs project at 400 N. Aberdeen, a 14-story office project at 1200 W. Carroll, a pair of massive high-rises straddling Carroll between May and Aberdeen, and whatever Sterling Bay eventually decides to do with the site of the former Archer Daniels Midland silos at 1300 W. Carroll.

The station would also create new transit-served opportunities for even more real estate development in the area. But despite the project having the support of some deep-pocketed developers, it's still too early to speculate as to when a West Loop Metra station might land financing, break ground, or actually open to commuters.

"I can't say when it's going to happen, but it's being worked on as we talk," Ald. Burnett added. "There are some things they can't share because it's still in the development phase, but it is happening."

The new station would occupy the red-shaded area and extend all the way west to Ashland, according to developer Mark Goodman.Original image by Solomon Cordwell Buenz, edits by Jay Koziarz